City of Surrey, Fraser Health and BC Housing coordinated to open the North Surrey Recreation Centre one week after police intervened on squatters seeking shelter from COVID-19
Apr 8, 2020 2:00 PM By: Graeme Wood 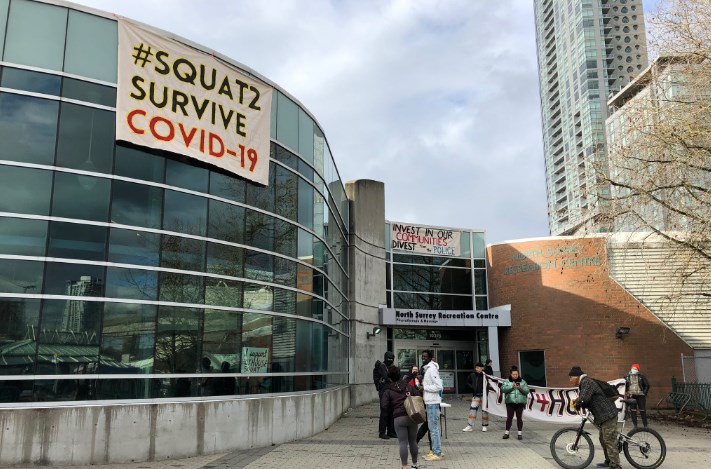 Desperate times call for desperate measures and so, a once-shuttered sports facility in Surrey will now shelter up to 110 people seeking a safe place to sleep and isolate during the coronavirus pandemic.

The City of Surrey announced Tuesday the North Surrey Recreation Centre will re-open temporarily in conjunction with Fraser Health Authority and the Surrey Urban Mission Society.

“By utilizing the decommissioned North Surrey Recreation Centre, we are providing our most vulnerable population with the most essential protective measure against COVID-19, which is the ability to physical distance,” said Mayor Doug McCallum.

The new shelter will see army-style folding cots spaced apart by several metres and across the facility, including on the two empty arena floors.

The facility was the site of a squat earlier this month, organized by the Red Braid Alliance for Decolonial Socialism.

Police had arrived at the facility on April 1 and disbursed the squatters, who reported seeing as many as 15 officers and a police dog.

The alliance is particularly concerned with at-risk Indigenous people in the community. It is making several demands for all levels of government, particularly during the pandemic.

First, vacant hotels should be used to house those without a home. This will allow for better isolation methods as compared to overcrowded shelters and modular housing. Second, police and bylaw officers should end enforcement of criminal code laws that are primarily applied to poor people, drug users and sex workers. Third, a free and safe supply of opiates and hygiene products is required for at-risk and vulnerable individuals. Fourth, welfare and temporary disability should match the federal emergency unemployment package of $2,000 per month to encompass non-status people and people who work in illicit and informal economies.

Activists contend their demands will help people isolate and stay healthy and thus prevent an outbreak of COVID-19.

At least one demand may be in the works, according to the city.

“BC Housing, with the support of City of Surrey, is continuing to explore opportunities to partner with local hotels to support frontline staff who are unable to go home during the COVID-19 outbreak, or for those who are unable to self-isolate due to living on the streets or in shelters,” noted a news release from city hall.

The centre will be referral-only, noted the city, and will prioritize the support of people living on the streets, in shelters, or for people coming out of acute care who do not have a safe place to self-isolate if they have symptoms or test positive for COVID-19.

Still, the referral process and the number of spaces are still worrying to the alliance, according to a statement via Twitter Wednesday.

“The immediate response from the group was, ‘It's something, but it's nowhere near enough. It just shows we have to keep fighting.’”

As it relates to Surrey, an analysis on TheVolcano.org, which is tracking the squat movement, links the city’s urban development to displacement of poor people into more vulnerable housing forms, or homelessness.

“Even before the COVID-19 pandemic broke out, the City Centre Plan was fast-tracking poor and homeless communities in North Surrey toward invisibility and death,” wrote Isabel Krupp. “Gentrification and its twin, the criminalization of poverty, interact with COVID-19 to ensure that the same people targeted for displacement are at heightened risk of contracting and succumbing to the deadly virus. If the City Centre Plan is an inferno, then COVID-19 is the latest bucket of gasoline thrown on the flames.”