Cyclists commuting to and from the North Shore will soon be able to roll through the Stanley Park causeway more safely, after the province committed $7 million this week to an upgrade project.
Mar 23, 2015 9:24 AM By: Maria Spitale-Leisk 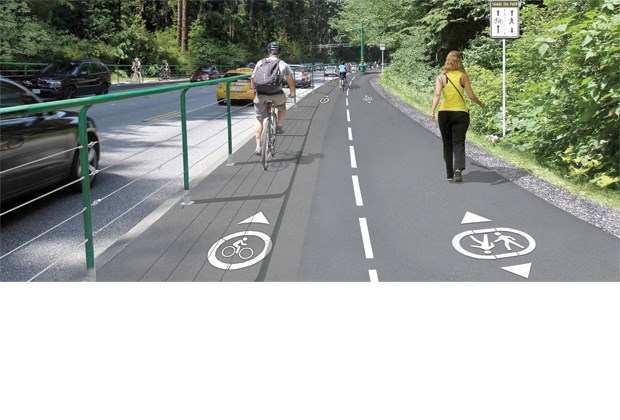 Cyclists commuting to and from the North Shore will soon be able to roll through the Stanley Park causeway more safely, after the province committed $7 million this week to an upgrade project.

Preliminary plans for improved pedestrian and cyclist safety unveiled last winter show a reconfigured causeway with widened northbound and southbound cycling lanes separated on opposite sides of the road.

North Vancouver’s two Liberal MLAs Naomi Yamamoto and Jane Thornthwaite were on hand in Stanley Park Tuesday as the province announced — as part of a new 10-year transportation plan — it would fund $7 million of the causeway facelift.

“With this investment in infrastructure for cyclists and pedestrians, we will be improving safety for all users on the causeway, and are helping to promote alternative modes of transportation on a very busy corridor,” stated B.C. Transportation Minister Todd Stone in a press release.

Cycling advocacy group HUB is among the stakeholders contributing input on the project, along with the Vancouver Park Board, the City of Vancouver and local First Nations.

The causeway design plan meets the needs of both cyclists and pedestrians, according to HUB spokeswoman and North Vancouver resident Heather Drugge.

While she hasn’t seen the latest iteration, Drugge is confident the final design won’t deviate from what has already been revealed.

“What’s good about this announcement is they (the province) are committing to an actual number. That $7 million will go a long way to create a high-quality infrastructure — way better than it is now,” said Drugge.

HUB has been advocating for causeway safety improvements since May 2013 when a North Vancouver woman was killed after she fell from her bike into the path of a bus.

The unseasonably warm weather this winter has led to an increase in cyclists on the road. We are also heading into tourist season which creates congestion and often conflicts for cyclists and pedestrians in the causeway, said Drugge.

A timeline for the project, which hinges on final approval from the Vancouver Park Board, has not been announced yet.

Also announced Tuesday as part of the same 10-year transportation plan: a new Highway 1 interchange at Mountain Highway, with construction scheduled to start in 2016, and a $37-million rail overpass at Phillips Road, to be jointly funded by the province and the District of North Vancouver.