The Squamish Nation is sending a message of solidarity and support to the Black community protesting for justice and an end to systemic racism.
Jun 12, 2020 4:34 PM By: Brent Richter 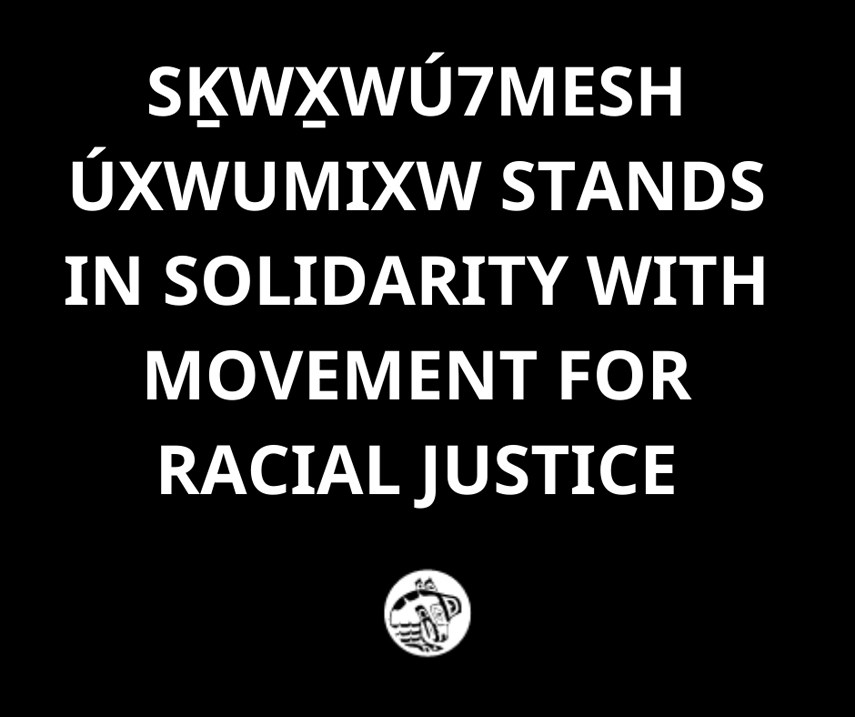 The Squamish Nation is sending a message of solidarity and support to the Black community protesting for justice and an end to systemic racism.

The Nation issued a statement on June 5 following international protests over the police choking death of George Floyd in Minneapolis.

“Protests across the United States and Canada have many of us thinking of our own experiences with racism. Much like the United States, deep-rooted systemic racism exists in Canada. Racism has been institutionalized and weaponized, allowing for unconscionable words and actions to become the norm rather than the exception. We condemn racism in all its forms,” the statement reads.

“We have to speak out. We have to stand united with the victims of marginalization, repression, and murder because of their skin colour. We have to stand with those who are calling for racial justice through peaceful protests across North America.”

Squamish Nation council co-chair Kristen Rivers said there are many nation members who are both Black and Indigenous, and the nation wanted to make sure they knew they were valued within their community.

“Now is not the time to be silent on these matters. There's a lot of commonality between the struggle of Black people and Indigenous people, and so we feel their pain,” she said.

The protests are highlighting a lot of things that are in need of change, Rivers said, starting with listening to Black and Indigenous people’s experiences with systemic racism.

“I think there's some denial on whether or not it's true and valid and it exists, but I think it's important as a good starting place to acknowledge that it is alive and it is happening in our communities,” she said.

Rivers said she was first targeted by racist slurs as a child on the soccer field, but feeling targeted is something that’s followed her everywhere.

“It's a part of our everyday life in all institutions. We go in, some of us, with the assumption knowing that we're not going to be treated the same way as you would be if our skin was different,” she said.

Squamish Nation elected council member Orene Askew, who is part Black, has spoken at two consecutive Black Lives Matter rallies in Vancouver, which Rivers said has been inspiring to see.

“I think it's powerful,” she said. “She has the ability to make change and she's doing that just by talking and raising awareness. I think it makes me feel hopeful. I think it also makes me feel a little bit reassured that younger people are looking up to her and knowing that they're not alone.”

Rivers said Squamish Nation council has been kept busy responding to COVID-19, but they will soon be reviewing their own human resource practices, looking to see if they can be improved.

As part of the solidarity message, the nation is also urging their members who are experiencing crisis to call the KUU-US Crisis line at 1-800-588-8717, available 24/7.