A Squamish Nation woman is still tending the sacred fire that's been burning on Burnaby Mountain throughout the whole ordeal between police and protesters. Sut-Lut, a Squamish elder, has been on Burnaby Mountain for about a month.
Nov 28, 2014 4:10 PM By: Jennifer Moreau 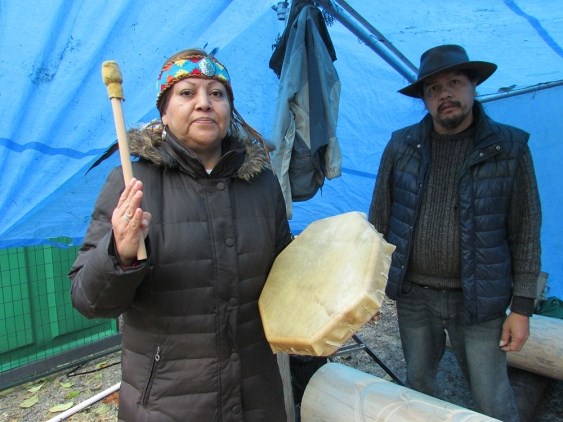 A Squamish Nation woman is still tending the sacred fire that's been burning on Burnaby Mountain throughout the whole ordeal between police and protesters.

Sut-Lut, a Squamish elder, has been on Burnaby Mountain for about a month. She started a sacred fire on Centennial Way and, with the help of other volunteers, she been tending it since, even from inside the police zone where most would be arrested.

Every day, Sut-Lut comes to Burnaby Mountain to make sure the flames do not go out.

"The first thing I do is I pray, because we Squamish people are a peaceful people," she says. "This isn't a First Nations issue, it's not a Burnaby resident problem only, it's a people problem, and it's about our survival. We have one Earth, and unless this government is hiding another healthy Earth somewhere, we need to take care of the one we've got, and it's now, it's now we have to step up."

Sut-Lut pointed out that Burnaby Mountain is unceded First Nations traditional territory, a common refrain among the protesters.

"We didn't sell it, we didn't give it away," she said. "I have the sovereign right to have my foot on this mountain."

And the police seem to agree. Staff Sgt. Major John Buis of the Burnaby RCMP said officers are respectful of First Nations traditions. During the standoff with protesters, Sut-Lut was allowed to stay inside the police zone, behind the yellow tape, to tend the fire.

"Sut-Lut is an elder from the Squamish Nation, and she asked to remain and care for that, and we respected that," Buis said. "We know there are also sorts of issues around land claims, and we wanted to make sure we were respectful of her request. And it didn't negatively impact our security plan."

Sut-Lut's brother Mike Antone, also allowed inside the police zone, has been carving two small totems, or protector poles. The plan is to erect the poles on the mountain, possibly this Sunday.

Sut-Lut said police were respectful to her, but at one point she was arrested for trying to prevent people from moving the totems.

The Tseil-Waututh Nation's traditional territory also encompasses Burnaby Mountain and the Burrard Inlet, and their representatives have been outspoken opponents of the Kinder Morgan pipeline expansion. First Nations must be consulted on major projects in the territories, and the Tsleil-Waututh have filed a legal challenge with the Federal Court of Appeal, claiming they were not adequately consulted.

On Thursday, police stopped enforcing the injunction on Centennial Way because Kinder Morgan had finished work at that site.

On Thursday evening, Sut-Lut was one of the speakers at a sold-out fundraiser for Burnaby Residents Opposing Kinder Morgan Expansion. She invited the crowd to visit her by the fire to talk.

For more stories from the Burnaby Now, click here.