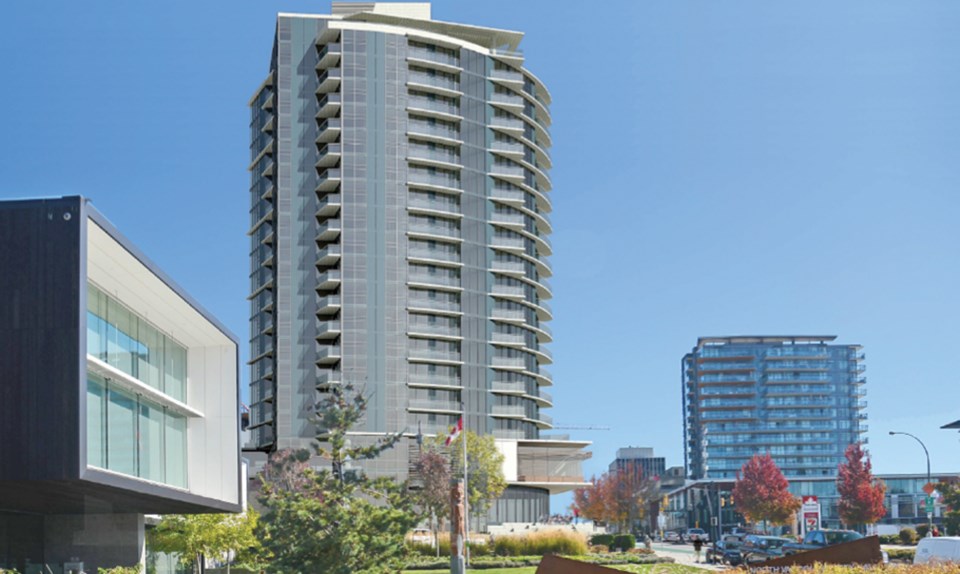 The 1301-1333 Lonsdale Avenue building is 66 feet higher than what was laid out in the official community plan – a sore spot for many who signed a petition opposing the project.

But while the petition drew 361 signatures, 840 hopefuls signed a wait-list for Hollyburn Properties’ previous Central Lonsdale development, noted Coun. Holly Back. “I’m afraid my heart goes out to the people who need housing,” she said.

Addressing concerns about neighbourhood gridlock, Back said she anticipated increased transit service from TransLink. “This building has public transit right at its front door. Well, it doesn’t get better than that.”

“We will reach a breaking point where people will simply say, ‘No. No more.’ And there will be a political price to pay, which is probably the least of the reasons (to reject the proposal).”

It would be “the easiest thing” for a politician to ignore the rental problem and reject Hollyburn’s project, according to Coun. Craig Keating.

Keating differed with many in the gallery as well as fellow Coun. Rod Clark on the role of the city’s official community plan.

“The central issue is not how we as politicians hold in our hands as a sanctified document that we ourselves made. It is dealing with the real-life situations of people who are desperate to find a place to live,” he said.

With one million residents expected to make their home in Metro Vancouver by 2040, Clark said he was “torn” on the project, but ultimately aligned himself with residents hoping for a more modest project.

“I haven’t forgotten the promise we made to the community,” he said, referring to the passage of the OCP.

With as much as 40 per cent of the city’s rental stock reaching the end of its life, there’s “no doubt,” there’s a need for rental housing, Bell noted. However, the city is “carrying our fair share” of Lower Mainland rental problems, he said.

The project will contribute to a “canyon effect” on Lonsdale, according to Bell, who joined Bookham and Clark in opposition.

The city needs social infrastructure that will support the service workers who constitute 45 per cent of the population, according to Buchanan.

If those workers can’t live in the city, they’ll either work and live and elsewhere or “spend hours on the road trying to get here,” she said.

“People are coming onto the North Shore to work,” he said.

Addressing OCP concerns, Mussatto pointed out the site was designated as a special study area, meaning density could be concentrated in the area. “It’s not like we’re just springing this on people,” he said.

The gallery was packed and largely divided, with slightly more than half of 44 speakers opposing the project, citing traffic, quality of life, and height that would overwhelm the view of the mountains.

However, there was strong support for the project among residents of the neighbouring Bridgewater project on 14th Street, North Vancouver’s Chamber of Commerce, the Lower Lonsdale Business Association, and Phil Chapman, retired planner with the District of North Vancouver.

“I’m here tonight as a concerned parent with two millennials I can’t get rid of,” he said.

To underline the housing crisis, Chapman submitted two ads from a recent North Shore News: one which offered a $1,500 basement suite in Lynn Valley and another advertising a $3,100 two-bedroom in Lower Lonsdale.

“There is no choice for our millennials,” he said, extolling the project as: “exactly what they want.”

The project will not help solve the rental crisis, according to Linda Hayes.

As someone who has benefited from density, Justin De Genova said it would be “somewhat hypocritical” for him to oppose the development. “We can’t even address (affordable housing) until we have available rental housing,” he said.

According to statistics from Fred Dawkins of North Van City Voices, there are more than 5,000 units in some stage of development in the city over the last five years.

“We are over-building this city beyond the carrying capacity of our roads, bridges and public transit,” he said.

While some speakers blasted the project for its lack of affordability, the project garnered support from Tracy Brown with Covenant House, who praised Hollyburn for offering three subsidized rental apartments to at-risk and homeless youth each year.

The project was also endorsed by Don Peters, chairman of the Community Housing Action Committee, who lauded Hollyburn for including four below-market units slated to be rented at $765 a month.

Rents at the Bridgewater project start at $1,300 for a one-bedroom unit and $1,700 for two bedrooms.

If he could “wave a wand” and build the 13th Street project tomorrow, the rents in the new project would be much the same, according to David Sander with Hollyburn Properties.

The tower would have a floor space ratio – which measures the building’s total floor space against its lot size – of 4.8. The site was previously zoned for an FSR of 2.6

At developer Hollyburn’s request, the city had earlier designated 1301 and 1333 Lonsdale Ave. as a special study area, noting the site’s importance in defining the city visually.

The proposal includes 14,118 square feet of commercial space and office space on the second-storey

The project requires one more vote before final adoption.