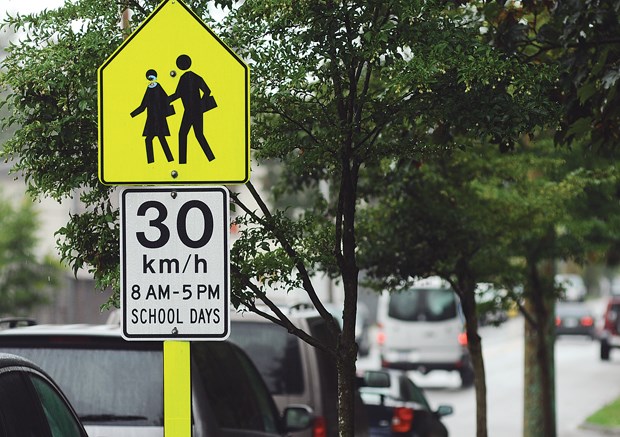 Drivers in the Ridgeway elementary school area will soon have to slow down to 30 km/h on more streets in the neighbourhood.

City of North Vancouver coucil voted six to one in favour of moving ahead with an expanded slow speed zone around the school at Monday’s general meeting.

The change will widen the 30km/h speed limit zone to include East 12th to East Eighth streets, Moody and Ridgeway avenues, and Lyon Place – adding to the city’s spring pilot to lower the speed limit on St. Andrews Avenue.

The report to council says while speed data collected in recent years showed that driver speeds were generally below 50 km/h, feedback from parents, school children, and neighbourhood residents highlighted they still felt it was too fast, and made walking and crossing the street less comfortable.

“I know from a number of the Ridgeway parents that I’ve spoken with over the past number of years that speed was one of their major concerns when it came to deciding whether to walk their kids to school, especially when it came to crossing intersections that may or may not have had crosswalks,” Coun. Angela Girard said, while commenting on the report to council.

However, Coun. Holly Back, who described herself as the “lonely goat” when opposing slowing the city down, said the expansion of the 30 km/ h zone near the school was too wide.

“This, sorry, it goes a little bit too far for my liking,” she said.

“I’m all about the safe travels and safe kids walking to school … but … it’s already difficult to get around, and from talking to the businesses in the area, they’re very upset about it.”

According to the report, the speed reduction would only increase travel times up to 15 seconds for someone driving to the nearest high-volume road.

Meanwhile, Mayor Linda Buchanan strongly supported going ahead with the change, linking the project to moving towards a goal of becoming “the healthiest small city.”

“It’s about the built environment and creating the conditions in which it allows people to make healthy choices,” she said.

The matter will return to council to be adopted at a later date. Signs are set to be erected in the area to inform residents of the changes.