North Vancouver’s Seymour River has been named among the most endangered in B.C. but it appears only volunteer groups are coming to its rescue. The 100,000-member Outdoor Recreation Council of B.C.
Mar 24, 2016 4:54 PM By: Brent Richter 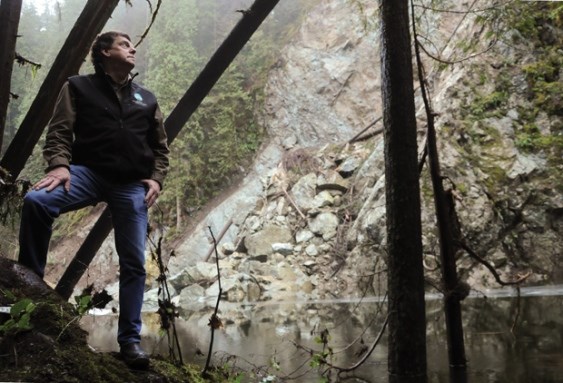 North Vancouver’s Seymour River has been named among the most endangered in B.C. but it appears only volunteer groups are coming to its rescue.

The 100,000-member Outdoor Recreation Council of B.C. added the Seymour to its bi-annual list of endangered rivers, thanks to the December-2014 rock slide that dumped more than 50,000 cubic metres of granite.

“When you look at the size of that rock slide, that’s enough material to fill a 13-storey building,” said Mark Angelo, council chairman. “You’re talking about a major slide that’s had an immense impact in that it’s blocked migration of key coho and steelhead stocks.”

Adding Seymour to the list is meant to draw attention to the rivers’ plight and spur senior levels of government, which have responsibility for salmon and trout, to mitigate the threats.

The Seymour supports rare runs of early coho and summer steelhead, making it unique in the Lower Mainland. Downstream species including otters, bears, minks and eagles have also been put at risk.

Since the slide, the Seymour Salmonid Society helped formulate a plan that would see the rock slowly broken apart using low-velocity explosives over a period of up to five years, allowing a channel for fish to migrate through. But so far, there’s been little federal or provincial support for the roughly $1.25 million that would cost.

In the meantime the society has co-ordinated hundreds of volunteers to physically net and carry fish returning to the river to spawn up above the blockage.

“Their efforts have been so valiant,” Angelo said. “That was an amazing effort but endeavours like that are not sustainable.”

But the society is planning to get started on the blasting soon, with or without support from the feds and province, according to Shaun Hollingsworth, society president.

“Rather than sit back and wait, we continue to do our fundraising and put things in place through the six levels of government and we plan on breaking rock this spring.”

Hollingsworth said he had his “fingers, eyes and toes crossed” in hopes the federal budget would fund the project, but so far, all Department of Fisheries and Oceans has been able to provide is $70,000. The province has yet to put up any funds.

Angelo said the feds and province ought to be taking the lead on the project, given what’s at stake.

“(Rivers) have immense natural values, immense cultural values, and immense recreational values and if we were to lose the kind of fish runs we’re talking about on the Seymour, that would be such a step back,” Angelo said. “Given the importance and uniqueness of the Seymour River and its fish stocks, we think everything possible must be done to mitigate the impacts of the slide.”