A chunk was taken out of the corner of this building's design to save a much-loved community cedar tree.
May 31, 2021 1:15 PM By: Elisia Seeber, Local Journalism Initiative Reporter 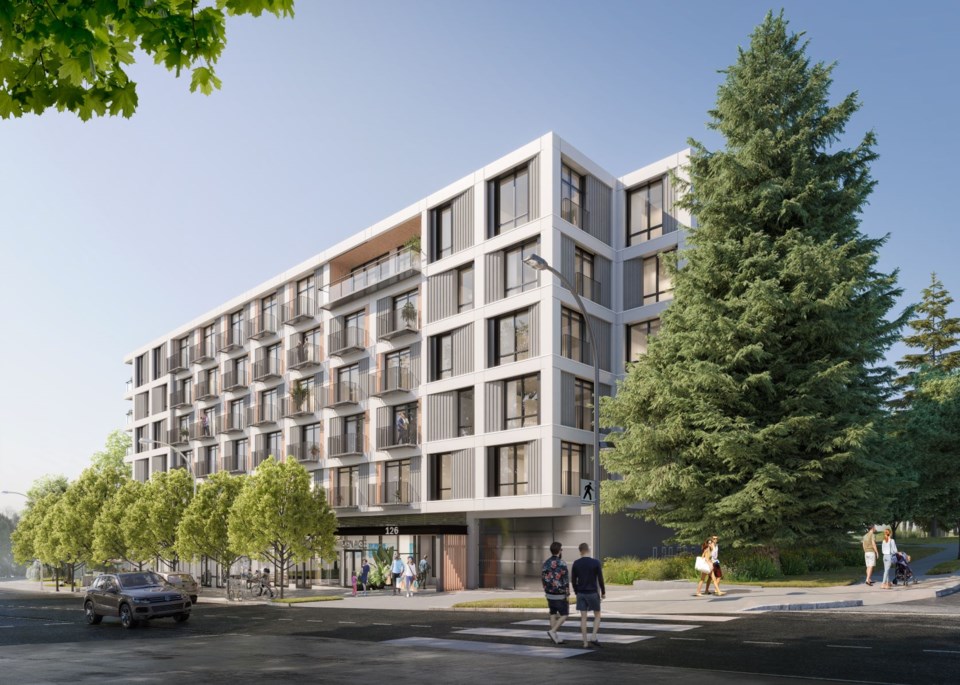 As construction is set to begin at the Harry Jerome Neighbourhood Lands in Central Lonsdale, residents can rest assured that a much-loved cedar tree that came very close to being felled because of the project will remain standing tall.

Darwin Properties will begin construction on June 2 of phase one of the 6.6-acre Lonsdale Square development that is set to transform the upper area of Lonsdale. The upcoming mixed-used community will feature more than 800 new homes, including seniors housing, non-profit and below-market rental housing, and a new 2.25-acre city park and revitalized Harry Jerome Community Recreation Centre.

Phase one of construction includes the 113-unit rental building that was redesigned by Darwin in April to accommodate a cedar tree estimated to be 205 years old after the community rallied relentlessly to save it. The rendering of the building shows how architects took a chunk out of the corner of the building’s design to make it possible to preserve the conifer at the corner of 21st Street and Eastern Avenue.

Phase one also includes the construction of the Sunrise Senior Living facility, which will be six storeys with 100 units for assisted living and memory care.

The tree was originally slated to be cut down mid-March to make way for the redevelopment, but thanks to residents’ persistent protests and efforts to be “a voice for the tree,” the developer held off on cutting down the cedar to reinvestigate whether there was a way to save it. After a root investigation proved the tree was healthy, Darwin’s architects completely redesigned part of the project.

“We worked hard to find a solution to ensure the preservation of the tree,” said Oliver Webbe, president of Darwin Properties. “The entire southeast corner of the building has basically been carved out to build around the tree. We will set the building back to make sure it's far enough away from the roots in order for the tree to be undisturbed and stay there forever.”

While the changes have come at a high cost to Darwin and caused construction delays, Webbe said it was worth the trouble.

“Although it significantly delays the delivery of rental housing on-site, we know the tree means a lot to many people, and we are proud to have found a solution that allows the tree to remain in the community,” he said.

The city announced in December 2020 it had signed a 99-year lease and issued development permits for Darwin and Sunrise Senior Living to begin work on the first residential building and assisted living facility in the multi-phase project. The lease will put $50 million in the bank for the eventual rebuild of the Harry Jerome Community Recreation Centre.

Back in March, when nearby residents found out the tree was destined to be felled, they quickly came together, organizing petitions and protests to save the tree. From March 15, the Save Our Cedar group collected more than 20,000 signatures in support of preserving the tree.