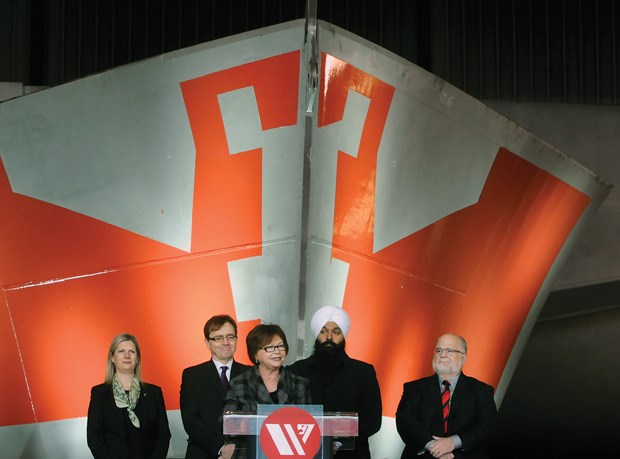 Judy Foote, the federal procurement minister responsible for large public contracts, was at Seaspan Shipyards in North Vancouver Monday morning to offer assurances her government is still committed to the National Shipbuilding Program, which gave the West Coast shipyard the right to negotiate contracts for federal non-combat vessels.

Foote was at the North Vancouver shipyard to announce $65.4 million in funding towards starting preliminary work on both an oceanographic science vessel and two joint support ships, expected to be built at Seaspan between 2017 and 2021.

The contracts – known as “long lead” contracts – will allow Seaspan to start sourcing expensive and specialized pieces of equipment for those projects that require a long lead time between when they are identified and when they can be delivered to the shipyard. That includes items like propulsion systems, scientific equipment and generators that must be chosen and in some cases ordered long before construction on the vessels starts.

Brian Carter, president of Seaspan Shipyards, told a crowd of shipyard workers the announcement marked a “major milestone” and said it was a reminder of the progress being made under the national shipbuilding program.

Carter reminded those gathered that Seaspan won the right to negotiate the non-combat shipbuilding contracts four years ago after a “very fair and transparent process.”

The concurrent design and build of several different shipbuilding projects underway at Seaspan is work that is only being done three shipyards in North America, said Carter, adding, “None of the other two are in Quebec.”

Carter’s comment was a pointed response to news that a Quebec shipyard, Davie, recently made an unsolicited bid to the federal government for work already awarded to Seaspan under the National Shipbuilding Program.

On Friday, Shirley Bond, B.C.’s jobs minister, described that as “unacceptable” and called on the government to respect the agreement already in place with Seaspan.

Foote appeared to offer that reassurance as she answered reporter’s questions on the shipbuilding program Monday. “We went down a path of fair and open competition. That’s been done,” she said. “Davie’s unsolicited bid was just that – an unsolicited bid. We’ve indicated to Davie we’re not open to receiving unsolicited bids.”

In comments to workers Monday, Foote said after a tour of the shipyard, she was impressed by what Seaspan has accomplished “in a short space of time.”

The federal government and Seaspan have yet to sign construction contracts for either the offshore oceanographic vessel or the joint support ships. In the interim, critics have repeatedly raised concerns that early budgets for those projects - $144.4 million for the oceanographic vessel and $2.3 billion for the two joint support ships - are likely to balloon when that happens – as they did for the three ocean fisheries vessels currently under construction at the shipyard.

The original budget to put those three vessels into service was $244 million but the final budget for the project has come in at $687 million, including training.

Both Foote and Carter acknowledged that a similar scenario is possible for other vessels in their answers to questions following the announcement.

Foote said the budget for the offshore oceanographic vessel was established eight years ago and didn’t take things like inflation, as well as some labour and equipment that would go into the ship, into account. “The costing methodology was such that it was unrealistic,” she said.

Foote said the federal government is now working closely with the shipyard to come up with a realistic plan for construction of the ships.

That has included the federal government hiring a shipbuilding expert from the U.K. to guide them through the contract process.

“We’re trying to make sure we get it right,”said Foote. “We inherited a bit of a mess,”she said, referring to how the budget figures were arrived at. “We’re working to fix that mess.”

Foote made Monday’s announcement in front of two massive blocks that will make up part of the first ocean fisheries vessel currently under construction in the shipyard.

There are currently about 350 tradesmen and women working in the shipyard, in addition to management employees, said Carter. That number is expected to ramp up to 1,000 when work on the offshore oceanographic vessel and joint navy support ships gets underway.