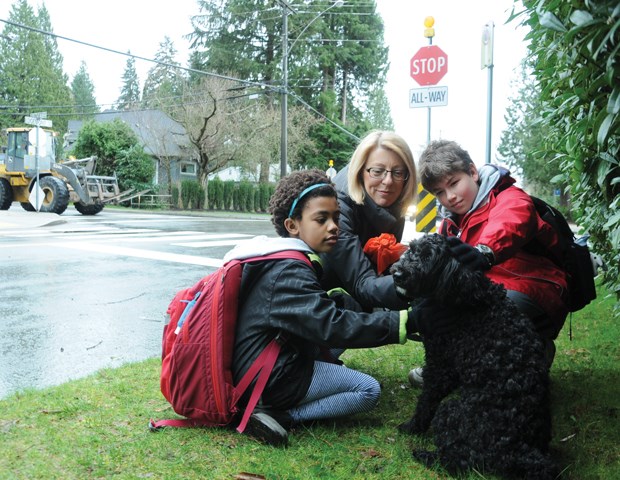 Parents whose kids walk and bike to school in the Edgemont area are hoping to see the temporary four-way stop signs installed for the Capilano water main project stay when the construction crews have moved on.

District of North Vancouver workers installed the all-way stops at the intersections of Capilano Road and Montroyal Boulevard, Montroyal and Highland Boulevard and as well as Sunset Boulevard and Edgemont Boulevard.

Slowing down traffic has made for a much safer walk to school, parents of Cleveland elementary and Handsworth secondary told district council March 7.

“As a Cleveland parent, I can say we’ve had an increase in students walking to school from south of Edgemont,” said Jeneen Sutherland, speaking on behalf of North Shore Safe Routes Advocates.

To date, the group has been told the four-way stops are “not warranted by national standards” and would likely have to come down when the Metro Vancouver water project is finished.

“Unfortunately, it seems many of these standards seem to cater to a very car-oriented society that does not seem to give enough consideration to pedestrians,” Sutherland said. “The SRA is constantly asking for safer infrastructure and the DNV often pushes back saying there is limited funding for these initiatives. In this case, these improvements are already paid for, so why not keep them as it will cost money to remove them?”

Craig Taylor, who also has children who commute in the area, asked council to go one step further and increase safety measures where Paisley Road and Sunset meet at Ridgewood Drive.

“One of the temporary crossing guards at the Ridgewood/Paisley intersection has commented this is one of the craziest intersections she’s ever worked at and I would concur, noting that many cars just do not stop unless they’re challenged by pedestrians,” he said.

“I believe we should embrace this challenge with a positive outlook rather than the potential NIMBYism that comes along with these sorts of advancements,” he said. “Keeping traffic flowing is essential but it cannot come at the expense of the safety of our children.”

Responding to parents lobbying council, district chief administrative officer David Stuart said staff will be taking another look at the intersections and that the 2016 budget will address active transportation.

“Council has provided direction for us to increase the amount of money going towards local transportation initiatives by $400,000,” he said.