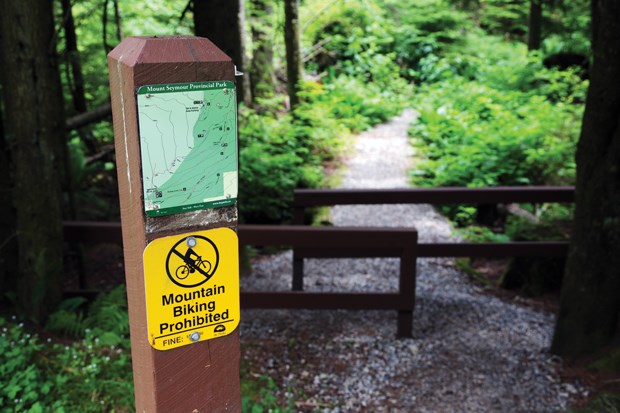 The public is at little risk of contracting the coronavirus while outside, the provincial health officer has stated, calling that possibility both “negligible” and “infinitesimally small.”

Dr. Bonnie Henry made those comments Wednesday, in response to a question about the risks of outside transmission of the virus.

“The risk that somebody who is sick is spreading this virus from coughing or sneezing outside and you walk by them very quickly, even if it is within six feet, is negligible. That’s not the way this virus is mostly transmitted,” said Henry.

Henry’s repeated comments that the risk of contracting the virus in outdoor settings is low has some outdoors advocates hopeful that provincial parks may soon be more available to the public.

The provincial and federal governments closed provincial and national parks earlier in the pandemic. Municipalities have followed with a variety of rules and suggestions for outdoor spaces, some less restrictive than others.

Steve Jones, a North Vancouver parks advocate and outdoors blogger, said he supported the province’s early decision to close the parks but is hoping some kind of re-opening will happen soon.

Provincial parks are such large areas and are so “massively underfunded” that in the early days of the pandemic “the only thing they could do was hit the kill switch,” said Jones.

But as people are cooped up for longer indoors and information about the virus grows as well, “I think people are getting antsy,” he said. “They’re getting more and more antsy all the time.”

Both Henry and other provincial officials have said that reopenings are likely in the works.

“We are looking at how we can open up the parks in a safe way as we start to transition to our new normal, and we're also talking with the federal government around federal parks and how they can be managed in a safe way for the future,” said Henry this week.

Jones said that would be welcome. “We have two massive provincial parks in our backyard,” he said, referring to Cypress and Seymour provincial parks. “I think people are really looking forward to [the province] putting a plan in place.”

Monika Bittel, another North Vancouver parks advocate and member of the Federation of Mountain Clubs of B.C., said she’s also hoping some provincial parks can be re-opened soon.

“I don’t think it should be a blanket closure of provincial parks,” she said. “In the Lower Mainland we have a population of 2.8 million, and we're all getting crammed into the few parks that are open which are typically regional or municipal operated.”

While some parks likely can’t be re-opened quickly – such as those which could attract out-of-town crowds to small communities or rock climbing areas that involve lots of touching – others could be, she said.

That’s especially true of provincial parks in or near to Metro Vancouver, like Cypress, Seymour and parts of Garibaldi, said Bittel.

Opening up more trails in the lower Seymour area would be especially welcome, Jones said, although he added at higher elevations the public still needs to be aware of winter conditions.

Bittel added one frustration is there’s been no opportunity for parks user groups to discuss the issue with government.

“We’re all kind of in the dark,” she said. “It would be nice to be able to have the discussion.”

She warned if widespread restrictions remain and people don’t understand them, it’s more likely some hikers will choose to ignore the rules.

Closer to home, both school and municipal playgrounds are closed, because of concerns about groups gathering and the risk that the virus can survive on hard surfaces.

Group activities that would involve gatherings beyond family members are being discouraged, but most local municipal trails, parks and fields remain open, provided that people practice physical distancing.

Earlier this month, West Vancouver equipped its bylaw officers with pool noodles to show how far apart people should be keeping. And the municipality suggested joggers limit their runs to earlier morning hours on weekends, after some people voiced concerns they were being passed too closely.

Concerns that the virus could be transmitted that way appear to be unfounded, according to Henry.

“The risk would be infinitesimally small. If somebody runs by you, if somebody walks by you, even if they were within six feet,” said Henry, while adding that keeping a distance is still desirable to make others feel comfortable.

West Vancouver councillor Craig Cameron said the municipality has got public feedback from “both ends of the spectrum” – both from those who feel the measures are unnecessarily restrictive and those who want more enforcement.

Cameron noted that there are no B.C. orders outright banning public activities, beyond gatherings of 50 people or more.

“The B.C. government has chosen to advise people of the need [for physical distancing outside] … but they haven’t made it mandatory. They’ve left it to citizens to act and adopt as they see fit within those broad parameters,” he said.

“There’s a huge amount of uncertainty and every municipality has interpreted it a little differently.”

“The district will monitor and assess our outdoor recreation opportunities and evaluate if they could be safely adjusted moving forward,” said municipal spokeswoman Donna Powers.

At school grounds of the North Vancouver School District, playground structures, sport courts and fields are closed for activities involving direct contact with equipment, or activities which do not support physical distancing, said spokeswoman Lisa Dalla Vecchia. This does not limit people from generally using the space for walking or exercise, so long as they practice physical distancing, she said.

On Wednesday, Henry said that the science about the transmission of COVID-19 outdoors is “something that I’ve been following very carefully around the world.”

So far, what the data supports is the virus is “more likely to transmit when we’re having close contact with people over time, with people in an enclosed environment, having dinner, or meetings, living with somebody,” she said.

One study looked at 138 clusters of the virus, said Henry, and found only one case associated with close contact outside.