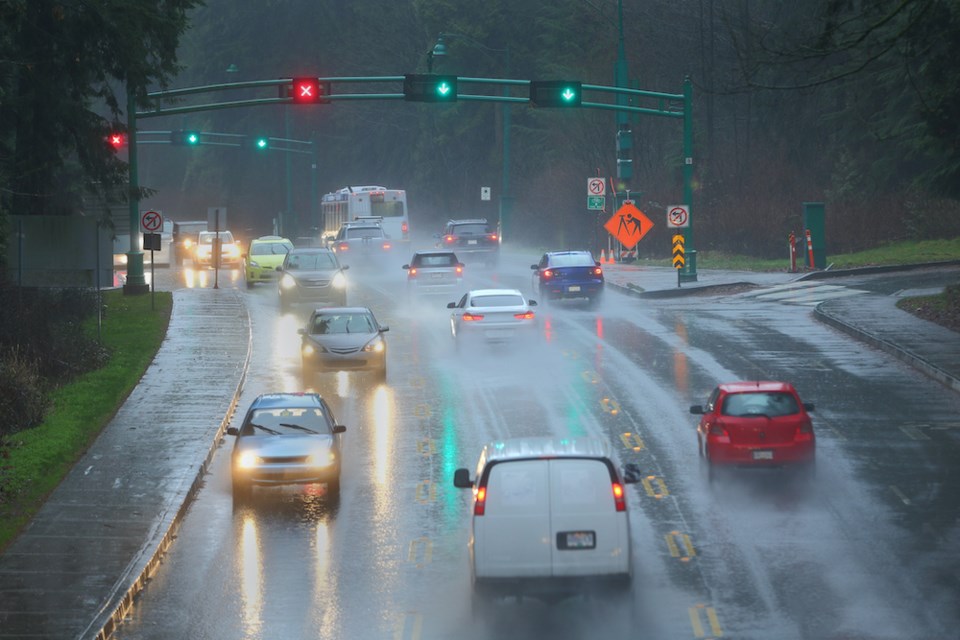 Environment Canada has issued a rainfall warning for parts of Metro Vancouver on Saturday, January 2. Photo via Maxvis / Getty Images

The new year is off to a rainy start in Vancouver.

Environment Canada on Saturday, Jan. 2 issued a rainfall warning in effect for parts of Metro Vancouver, including the North Shore, and the northeast including Coquitlam and Maple Ridge. The alert extends up the Sea to Sky corridor to Whistler.

According to the weather agency, yet another moist Pacific front is responsible for bringing more heavy rain to the south coast.

The forecast calls for up to 50 millimetres of rain to fall over Howe Sound and northern sections of Metro Vancouver by Saturday evening. The heavy rain is expected to cease this evening as the front moves inland.

As a result, Environment Canada warns that localized flooding in low-lying areas is possible. "Don't approach washouts near rivers, creeks and culverts," the weather alert cautions.

The heavy rain is accompanied by high winds, with gusts reaching up to 60 kilometres per hour in Vancouver this afternoon.

The extreme weather has prompted ski resorts in Metro Vancouver to close for the day, as well.

All mountaintop activities at Grouse Mountain are closed Saturday, including the resort's downhill area, Skyride and chalet facilities. Snow School Lessons scheduled to take place today have also been postponed. Mt. Seymour is closed for the day, and scheduled to reopen Sunday morning.

Meanwhile, Cypress Mountain's downhill area remains open until 10 p.m. Saturday. Cypress' Lions, Eagle, Raven and Easy Rider chairs are in operation, while Sky Chair is currently on standby, according to the resort's website.

B.C. is set to get drenched again this week, with Environment Canada predicting a chance of showers in Metro Vancouver's forecast for the next six days.

As the latest weather system continues to hammer the coast, Avalanche Canada is warning backcountry users to heed caution. National avalanche forecasters have listed Saturday's danger ratings in the South Coast region, including Metro Vancouver, as "high" for alpine and treeline terrain, and "considerable" below the treeline.

Meanwhile in the Sea to Sky corridor, the weekend's danger rating remains high for all terrain, including below the treeline. Backcountry users are urged to avoid avalanche terrain entirely.

Forecasters credit "a complex snowpack" with several avalanche incidents that have taken place across the region in the last week, including a fatal avalanche near Pemberton that happened on Monday, Dec. 28.