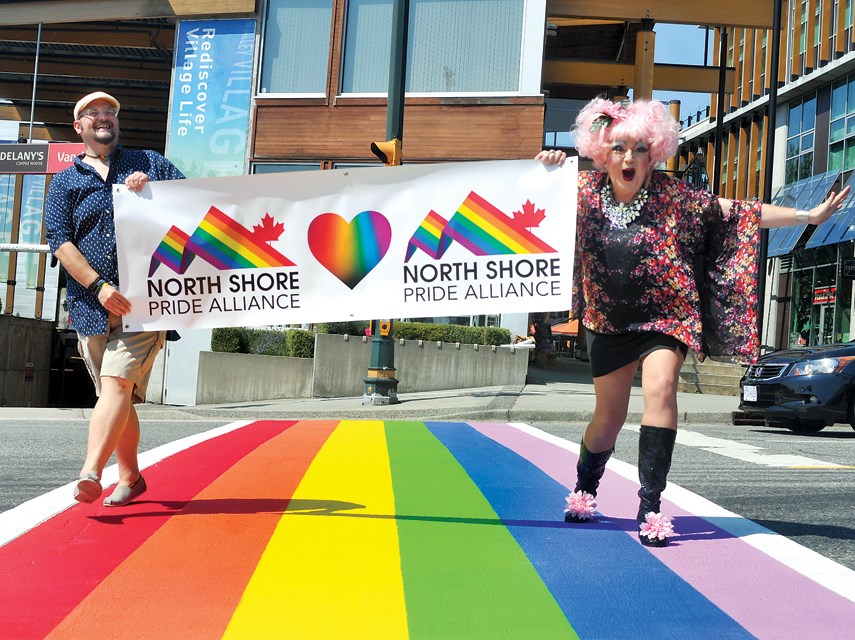 On the eve of the North Shore LGBTQ2SI+ community’s annual Pride Week celebration, the group is reeling from the area’s newest rainbow crosswalk being defaced with profanity and a hateful slur.

The District of North Vancouver had only just painted the symbol of welcoming and inclusion on Mountain Highway outside the Lynn Valley Library on July 6. Sometime on July 19 or 20, it was spray-painted with a hateful message.

“It breaks my heart,” said Chris Bolton, co-founder of the North Shore Pride Alliance. “But while I’m disappointed, I think it refuels my desire for Pride. … It just shows that we have so much more work to do. I think that the number one thing is to show them that they can’t stop us.”

Bolton (along with his uber-famous drag queen persona Conni Smudge) and fellow organizer Gary Fluffer are preparing to launch a week of Pride-themed, COVID-safe events, which will now have to be louder and prouder, he said.

On July 26, the first day of Pride Week, the District of West Vancouver and City of North Vancouver will both be raising the Pride flag.

On Tuesday night, the Gull Bar and Kitchen will be hosting a Pride themed trivia night. On Wednesday, the group is releasing their first food-related Pride video – something Bolton referred to as a “big gay charcuterie board.” From 2 to 5 p.m. on Thursday, the group is hosting an LGBT game show in the parklet at 14th and Lonsdale.

Starting on Friday and running until Monday, Bolton has brought back a popular art show, with artists’ work facing out from all the windows of the Pipe Shop in the Shipyards District. The main musical event takes place from 7 to 9 p.m. on Friday followed by some light “carousing” in the Lower Lonsdale area. At 10 a.m. Saturday Smudge is booked at the Shipyards for kids’ story time, songs and crafts. Sunday, is for recovery.

“Conni Smudge will be sitting around somewhere in Lower Lonsdale with raccoon eyes and an icy cold Caesar,” he said with a laugh

Many of the events will be streamed via the Pride Alliance’s social media channels on Facebook, YouTube and Twitter. And Smudge has a few other tricks up sequined sleeves – pop-up drag performances at surprise locations.

People “on the rainbow spectrum” disproportionately have mental health troubles, Bolton said, and a major coping mechanism is coming together to socialize. For them, it has been a long 17 months under COVID-19.

“I think that a lot of people in the LGBTQ community specifically have family members who aren’t supportive in the best of times. That’s where I think the friendships that we create, the tribe that we create, is the family that we choose,” he said.

North Vancouver RCMP are now treating the crosswalk graffiti as a hate crime.

“We are actively pursuing this investigation, and ask anyone who may have video surveillance of this incident, or know anything about who may be responsible, to please contact us,” said Sgt. Peter DeVries, North Vancouver RCMP spokesman.

The district chose the location for the crosswalk on Mountain Highway outside the Lynn Valley library because they wanted to emphasize that it is barrier free and inclusive, according to Mayor Mike Little.

As of Tuesday afternoon, a graffiti removal company was on site working to remove the slur.

“The crosswalk, which symbolizes inclusivity, has been extremely well-received by our community. Many residents have expressed their delight with its installation and their support for it,” a statement from district spokeswoman Cassie Brondgeest said. “We are disappointed to see this type of graffiti in our community. However, we are confident that any opposition to the crosswalk is limited to a very small minority.”

Bolton said if he ever has the chance to meet the person responsible, he’d first want to listen and understand what motivated them and then pivot to a chance to educate.

“[I hope] we can not only find the perpetrators, but hopefully enlighten them,” he said. “Was it just this stupid one night drinking joke? Or do they have some real problems that I can help answer? This crosswalk isn’t threatening their way of life. It’s celebrating everybody’s life and letting people know that they matter.”