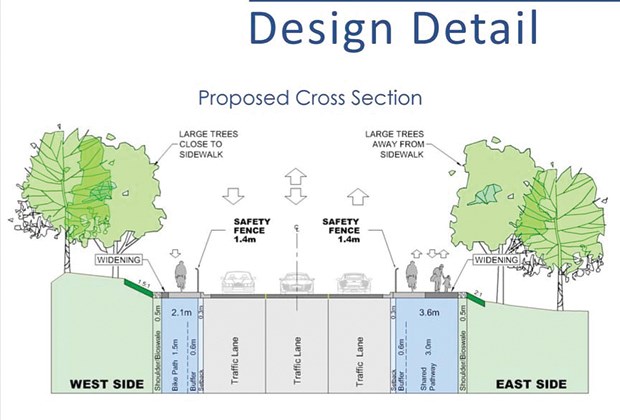 The province's design drawing of the proposed upgrades to the Stanley Park Causeway.image supplied

North Shore cyclists and pedestrians will have a little more elbow room and a lot more safety when traversing the Stanley Park Causeway if the province and Vancouver Park Board follow through on recently released plans.

The ministry of transportation and infrastructure on Tuesday debuted its designs to separate northbound and southbound cyclists onto opposite sides of the road, along with wider sidewalks and a pedestrianonly route.

Under the plans, the east sidewalk will be widened by 1.9 metres and be designated for two-way pedestrian traffic and northbound cyclists. The west sidewalk will be widened by a more modest 0.4 metres and be reserved for southbound cyclists only. Both sides will be separated from the road by a 1.4-metre high safety fence. Widening the sidewalks would mean removing 14 of Stanley Park's hallowed trees.

The plan is being warmly received by North Shore members of the cycling advocacy group HUB.

Members of the group had been lobbying for safety improvements since May 2013 when a North Vancouver woman was killed after she fell from her bike into the path of a West Vancouver transit bus.

"It's a pretty creative way of getting almost everything we asked for," said Heather Drugge, HUB spokeswoman. "It's pretty interesting, isn't it, because of the asymmetrical nature of the design. I think overall we're very pleased."

The southbound, west sidewalk tends to have more conflicts as cyclists pick up a lot of speed on the downhill from the Lions Gate Bridge, she said.

And the east side is more suited to a shared path, Drugge added.

"Not only is the east side very wide, the cyclists are not moving very quickly because it's uphill. If everybody behaves, this system should work," she said. "Whenever you enter into social engineering... there's always going to be some non-compliance. But the non-compliers are probably going to be oneoffs."

The province's engineers also came forward with a concept that will create the least amount of grief for environmentalists, many of whom are also cyclists, Drugge said.

"Other options that came up would have removed so many trees on the other west side that the whole thing never would have gone through," she said.

The Vancouver Park Board must still vote on whether to allow the province to go ahead with the work, but based on the conversation Drugge had with park board members on Tuesday, she is optimistic that will happen this spring. "They seem to think this was an excellent compromise position," she said.

The ministry of transportation and infrastructure and the park board are both asking for public feedback on the plan at gov.bc.ca/stanleyparkcauseway.