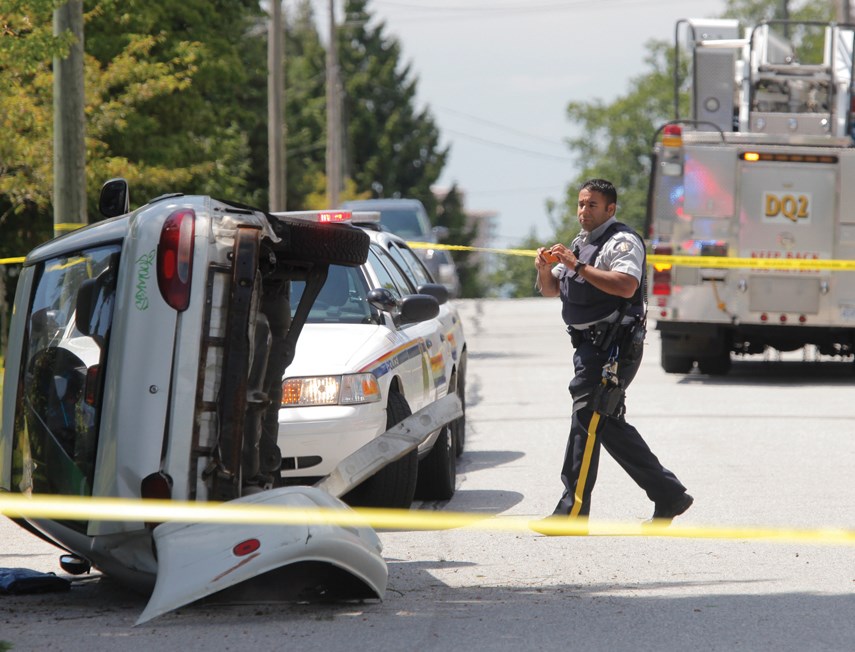 The province is clearing the way for – hopefully - clearer bridges.

The Ministry of Public Safety and solicitor general announced Friday that police will no longer have to file written reports before vehicles can be towed from crash scenes unless someone has been injured or combined damage to the vehicles exceeds $10,000.

“As you know, a $1,000 threshold really isn’t much for a vehicle these days. … A small scratch on your bumper and you could be well over $1,000,” said NDP MLA for North Vancouver-Lonsdale Bowinn Ma. “That figure was put in place a long, long time ago and it really is time it’s changed.”

When a minor fender bender occurs, every minute counts as traffic backs up and the risk of further “secondary collisions” goes up, Ma said, especially if collisions are on the Lions Gate Bridge or Ironworkers Memorial Second Narrows Crossing.

“I think North Shore commuters will generally agree that while high traffic volumes do slow down their commutes, what’s really frustrating is when collisions occur that back up the entire highway for unpredictable amounts of time, because you cannot plan for that,” she said.

Ma had been lobbying for the change within cabinet, after she was first approached by former District of North Vancouver mayor Richard Walton in 2017. In September of that year, district council formally asked for the Union of B.C. Municipalities to take it up with the province, in the interest of expedited crash clearing. It was also one of the priorities that came out of the Integrated North Shore Transportation Planning Project, which Ma spearheaded last year and continues to implement.

“It really helped me make the case that this was something we needed to do,” she said.

How much of a difference the change will make to commute times remains to be seen. Of the 291 damage-causing collisions that West Vancouver police responded to in 2018, only a quarter crossed the $10,000 threshold, according to the department. But only 21 of those crashes were on the northern portion of the Lions Gate Bridge under WVPD jurisdiction and in 11 of those cases, police were still required to attend because of injuries or because the vehicles were too damaged to drive.

“If people’s vehicles are still drivable after a collision, our general experience is they’ll drive ahead to the pullout area,” said Const. Jeff Palmer, West Vancouver police spokesman. “If the vehicles aren’t drivable, it’s not going to matter whether it’s under $10,000 damage. We’re still going to have to attend, control traffic, get a tow truck in there.”

Neither Port Mann RCMP, which patrols Highway 1 as far as the Capilano River, nor ICBC could provide statistics on collisions in North Vancouver. But RCMP traffic services division spokesman Cpl. Michael Halskov said he sees potential for faster crash clearing.

“Certainly many of the crashes that are happening during rush hour are those fender-bender type things where it’s innocent enough and there’s nothing unusual going on,” he said “When these things happen … we have to contend with the very thing that every other driver is contending with, and that’s the backlog in traffic,” he added with a laugh.

Sometimes it takes traffic officers 30 minutes just to get to the scene of a crash on the Ironworkers, Halskov said. They then have to gather information from all people involved, and fill out a form before tow trucks are allowed to move the vehicles.

“And that’s just for a basic one,” Halskov said. “That can take a heck of a long time for a minor crash and it’s a really unnecessary delay for a whole lot of people, especially if there is no one injured.”

Ma said she doesn’t see the regulatory change as a panacea for the almost daily traffic jams stemming from the bridges, but she said it should be viewed as part of a suite of changes the province is making to alleviate North Shore traffic. The province signed a contract last year with a new towing company for clearing crashes from the bridges. The contract included higher standards for readiness and larger tow vehicles on standby, but there isn’t enough data yet to conclude whether there has been an improvement, Ma said. The province will also soon be deploying traffic warning signs in strategic locations.