Plans for a new patient tower at Lions Gate Hospital have cleared one of the final government hurdles before construction can begin.
Brent Richter Sep 17, 2018 2:50 PM

Plans for a new patient tower at Lions Gate Hospital have cleared one of the final government hurdles before construction can begin.

Health Minister Adrian Dix announced Monday that the province’s treasury board had approved the business plan for the $166-million acute care facility.

“It the next-to-last stage before the stage we all really like which is tenders and construction,” he said. “We look at the nitty gritty details such as bed numbers, space size, services cost and construction deadline and I’m very pleased to announce today that the government has taken action and approved the business plan for the new acute care tower at Lions Gate Hospital. It’s a go.”

If all goes well, shovels will be in the ground in early 2020 and patients will be treated in the new facility by 2023, according to Dix.

The new acute care building will be a six-storey tower with 108 beds – all in individual rooms - eight new operating rooms and a medical-device reprocessing department. It will be constructed at the site of the Activation Building, first opened in 1929 as North Vancouver General Hospital and demolished in 2017.

Patients will be well served by being moved out of the outdated hospital building at the corner of 13th Street and St. Georges Avenue, said Dr. Peter Edmunds, co-senior medical director for Vancouver Coastal Health.

“As you know, that tower was built in the 60s, which is when I was built. And I can tell you, we’re both beginning to show our age,” he said. “The idea of being able to move to a new facility and having that promise has done so much to inspire and re-enthuse our physicians and staff on the North Shore.”

The 108 new beds will be able to meet the needs of the North Shore, Edmunds added, especially as the healthcare system shifts its emphasis to treatment in the community.

The new Lions Gate building is unique among hospital expansion projects in that it is the only one funded more than 50 per cent by donations from the community. Almost $100 million of the cost is being covered by donations through the Lions Gate Hospital Foundation. Of that, $25 million came as a single contribution from North Shore resident and local entrepreneur Paul Myers, for whom the new tower will be named. Dix called that extraordinary in the history of public health in Canada. 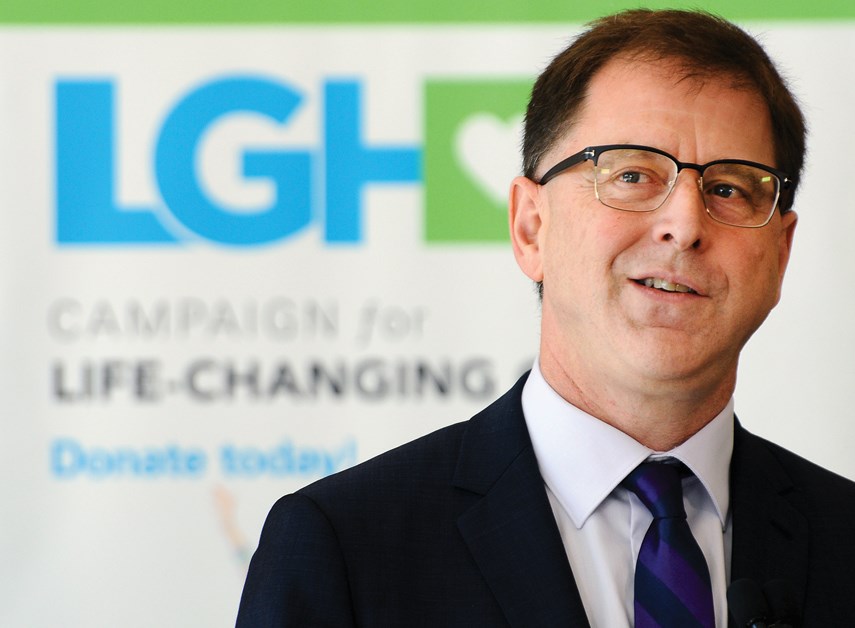