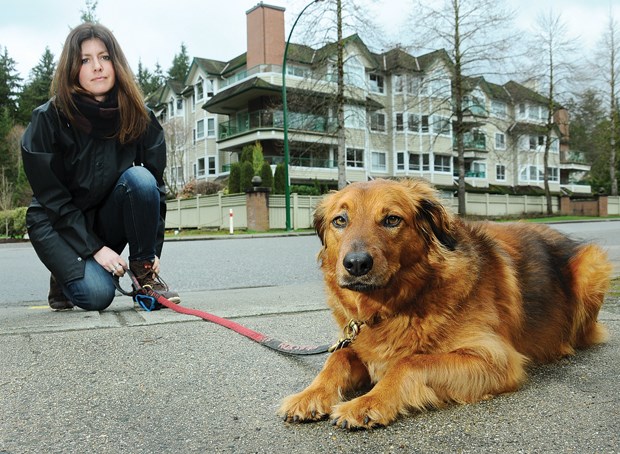 North Vancouver native Jess Nelson would love to move back to the North Shore – but no landlords will have her four-year-old mutt Red.

In a rental market with less than one per cent vacancy, the already competitive task of finding a home has been made almost impossible for people with pets, she’s found.

Nelson is now lobbying North Shore MLAs for changes to the Residential Tenancy Act so landlords will no longer be able to discriminate against potential tenants based on pets. Similar legislation exists in Ontario.

“It can’t be that just because you have (a pet), you’re not even given consideration,” she said.

Of the 290 listings under $1,500 per month listed on online in the last week of February, only 13 per cent indicated they would allow a dog, Nelson found, and many of them would only allow small dogs.

She also emailed and spoke to 10 owners or building managers, all of whom immediately rejected her rental inquiry because of Red, even when Nelson offered to provide references vouching for him as being a very good boy. “He’s great. He’s super mellow. He goes to work with my boyfriend every day,” she said. “He doesn’t bark. He’s great with other dogs. He’s not a problem.”

“When you look at the SPCA’s research, a lot of people are losing or letting go of their pets because of the rental situation out there, which I don’t think is a great thing. I think pets actually contribute quite a bit to people’s mental health and even community. People go out to dog parks and talk to their neighbours,” she said.

According to the BC SPCA, roughly 20 per cent of animals surrendered for adoption are being given up for housing-related reasons – about 1,500 pets per year.

The organization does offer a “tool kit” to help pet owners to find a home for themselves and their animals. It contains a template for a “pet resume” and sample pet policy of additional rules a landlord and tenant could agree on to assuage any concerns.

Luckily, Nelson has time on her side and she is in no rush to move back to the North Shore. But plenty of people find themselves under a time constraint, having to be out of their unit by the end of the month, often without a new lease signed.

“It’s actually kind of scary because you can be homeless if you’re not able to find a place,” she said.

And Nelson practises what she preaches. She owns a unit in Whistler which she rents out and allows her tenants to own pets.

“I understand the flip side of this,” she said.

But any attempts to limit landlords’ property rights will be met by opposition from the rental industry, said David Hutniak, CEO of LandlordBC.

“We’re not insensitive to this issue but here’s the problem: the Residential Tenancy Act allows us to charge an additional half-month’s rent as a deposit for pets and the reality is, that is woefully inadequate for the type of damage that inherently results from having pets in apartments,” he said.

After a tenant with a dog or cat vacates a suite, it invariably means replacing the carpets and more repairs, Hutniak said.

Even more critical is the need to balance the interests of all the tenants in a building, Hutniak added, noting not everyone is comfortable sharing their building with neighbours who bark, scratch, antagonize allergies or carry fleas.

“If there’s any disruption of their enjoyment of their apartment, then it opens the door for them to file a dispute, which obviously creates inconvenience and costs for us. It’s clearly something we wish to avoid. We want to try and keep everybody happy,” he said.

“I think it’s a good point and it’s worth having a conversation about,” she said. “I like the idea of dogs . . . I also appreciate landlords’ concerns because what it comes down to is responsible ownership.”

Thornthwaite said she’d also want some data on whether the 2004 change to allow for pet damage deposits has been effective, suggesting the allowable deposits could be higher.

“If in, if fact more landlords are allowing more pets because of that, then we’re in the right direction,” she said.