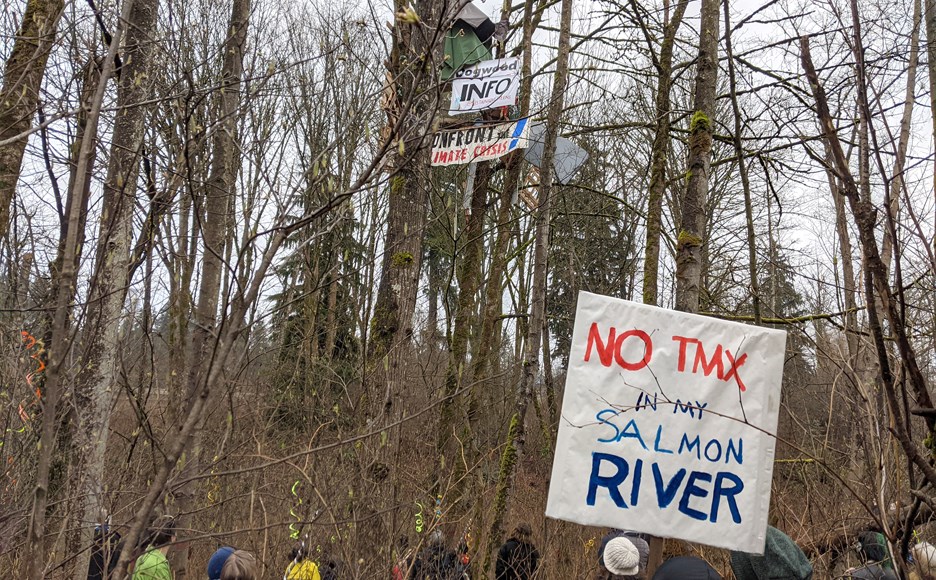 A protest was held near the Brunette River in Burnaby as Trans Mountain starts cutting down trees.Stop TMX

Another large protest was held in Burnaby earlier this week condemning the Trans Mountain pipeline expansion project, but chainsaws still went ahead cutting down local trees in area around the Brunette River.

The protest on Sunday included a march to visit activists camped in a treehouse 60 feet in a tree along the pipeline route. One activist has been camped in the tree for over two months.

A video - posted below - shows workers with their chainsaws clearing an area in Burnaby where the pipeline will run.

People at the protest included Burnaby Coun. Joe Keithley, as well as high school students who attended the event to stress the importance of stopping the pipeline for their generation.

“As young people, our futures are directly impacted by our government’s inaction on climate change today,” said Burnaby student Lilah Williamson.
The main organizers behind the action were Protect the Planet: Stop TMX.

Trans Mountain was recently granted the ability to circumvent a section of the City of Burnaby’s tree bylaw, which requires a permit for anyone to damage or cut down any protected tree – those with 20.3-centimetre diameters or larger – in the city. However, the order, which came from the Canada Energy Regulator, said the project needed to comply with all other sections of the bylaw. Trans Mountain plans to cut down 1,308 protected trees in Burnaby, not including trees with smaller trunks.

The Brunette River area has been the most recent front line in a dispute between Trans Mountain and anti-pipeline activists, who say the pipeline will make it impossible for Canada to meet its climate targets and removing the trees will disrupt a sensitive ecosystem around the river.

The sound of #TMX industriously working to fuel mass extinction. Every tool in the toolbox @jjhorgan? It's your job to protect the land & waters so that urban forests have a chance to become old growth - heartbreaking to hear these chainsaws in the @CityofBurnaby. #StopTMX pic.twitter.com/uFIeJAeqm2

“Trans Mountain has started the clearing work needed to safely construct the pipeline in the Brunette area - the work area is located in the transportation corridor between the CN Rail line and Highway 1 immediately west of the Brunette exit off-ramp in Burnaby,” said a statement by Trans Mountain. “This work is expected to take several weeks.”