A “fingerprint” of harmful bunker oil found in water and sediment around Burrard Inlet in the wake of an English Bay oil spill April 8 has been definitively linked to MV Marathassa.
Jul 24, 2015 12:00 AM By: Jane Seyd 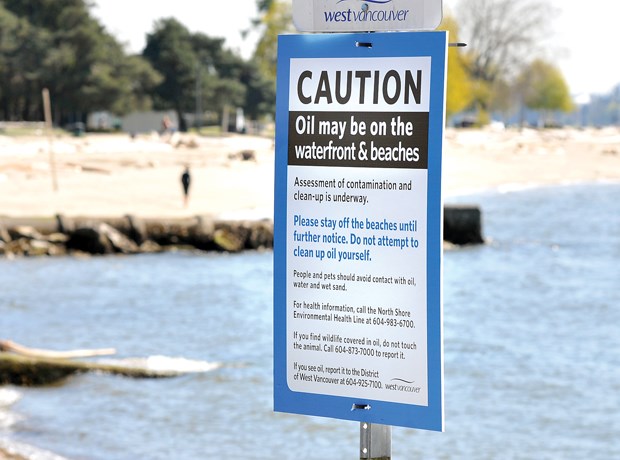 A “fingerprint” of harmful bunker oil found in water and sediment around Burrard Inlet in the wake of an English Bay oil spill April 8 has been definitively linked to MV Marathassa.

In the wake of the oil spill this spring, scientists from the Vancouver Aquarium’s pollution research program collected more than 20 samples of water, sediment and shellfish from the shoreline of English Bay and both sides of Burrard Inlet and compared those with a “fingerprint” of oil from the ship.

Results show the oil travelled to beaches as far east as New Brighton Beach near the south side of the Ironworkers Memorial Second Narrows Crossing and in Burrard Inlet water east of the Lions Gate Bridge.

Mixed results — meaning the oil could have come from a number of sources — were found in sediments from West Vancouver beaches.

Peter Ross, head of the pollution research program, said the results aren’t surprising, but are important in tying environmental impacts to the specific Marathassa spill.

Ross said results are also important because they conclusively show how far the oil spread in the days following the spill.

“It’s one thing to model these things and speculate,” he said, “It’s another to see how this product actually behaves in the environment.”

In the case of the Marathassa, incoming tides quickly spread the oil throughout the area, depositing it on beaches over 10 kilometres away.

In several samples from the beaches around English Bay, hydrocarbons identified exceeded current environmental guidelines for protection of marine life.

It’s a reminder, said Ross, that “this spill released a harmful substance that is difficult to control and clean up.”

Crab fishing in Burrard Inlet was temporarily banned and beaches in West Vancouver were closed after oil washed ashore there in the days following the spill.

Local governments criticized the Coast Guard for not getting a containment boom around the leaking ship for about 12 hours after the spill was first reported and for not alerting municipal officials that the spill had happened.

The spill occurred as political debate has heated up about Kinder Morgan’s application to increase the volume of oil being shipped by pipeline and tanker ship through Burrard Inlet.

An oil spill modelling study completed for the Tsleil-Waututh Nation, City of Vancouver and City of Burnaby this spring showed in a worst-case scenario, over half of the oil from a major oil spill would reach the shores of Burrard Inlet within hours.