Some clap their hands. Others bang pots and pans. The Pink Pied Piper, as his name would suggest, shows his appreciation for health-care workers on the COVID-19 frontlines with his Scottish bagpipes.
Mar 26, 2020 8:48 PM By: Brent Richter 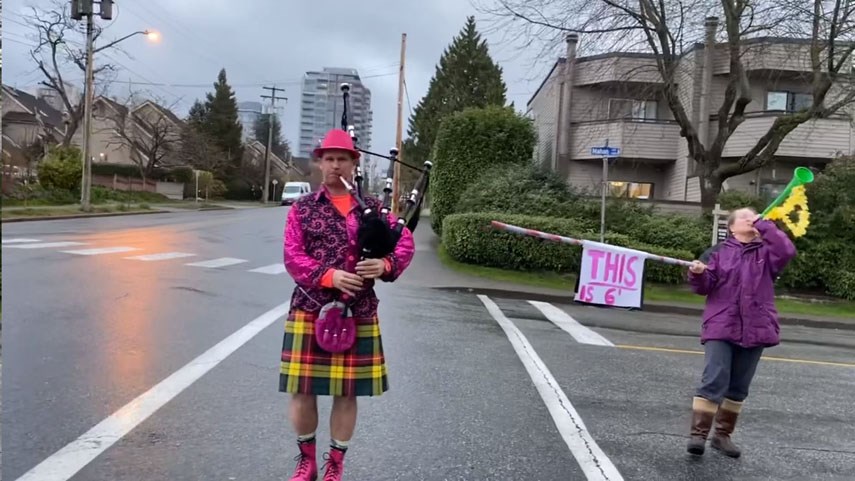 Some clap their hands. Others bang pots and pans. The Pink Pied Piper, as his name would suggest, shows his appreciation for health-care workers on the COVID-19 frontlines with his Scottish bagpipes.

For the last three nights Frank Wimberley has donned his ancestral tartan and marched out to 15th Street and Mahon Avenue where he’s joined the nightly 7-p.m. cacophony for workers.

Wimberley fellow members of the Docs & Socks Pipe Band were doing the same in front of their own homes in Lynn Valley, Upper Lonsdale and Kitsilano.

(The band takes their name from two things that should be worn under a man’s kilt – Doc Martins shoes and socks).

“We don’t meet up to practise. We go on parades, which normally involves a pub crawl,” Wimberley said.

Now, not everybody loves the dulcet drone of the pipes, Wimberley will be the first to admit. More than few people joked that the performance was intended to kill the virus.

“Or certainly to keep people away and have social distancing in place,” he said with a laugh. “I know the neighbours here are pretty long suffering.”

Mostly though, the reaction from passersby has been warm, he said.

“We have lots of folks saying wonderful things… great lots of clapping,” he said “It was well appreciated by everyone going past so we hope to continue.”

On Thursday evening, Wimberley opted to play the bagpipes crowd pleaser Scotland the Brave as well as Rowan Tree.

“Most folk would say.. they all sound the same,” he joked.

Wimberley’s wife Teresa joins him in the performance blowing an air horn and holding out a six-foot pole to demonstrate appropriate physical distancing.

Wimberley said he likes to think there are health-care workers getting off shift and heading for home when 7 p.m. hits and the round of applause begins.

“I think it’s great that it’s helping the community – that we can do our bit to help the health workers who are bearing the brunt of this pandemic,” he said.