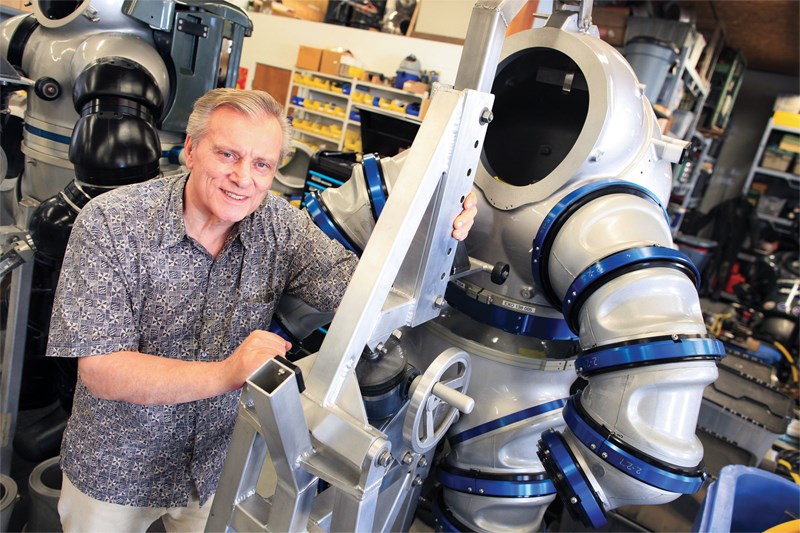 The entrepreneur, Aboriginal artist and inventor of undersea technology from North Vancouver has some loose ends to tie up before flying to Ottawa where he’ll be named an Officer of the Order of Canada on Friday.

Every year, the Governor General adds new members to the list of eminent Canadians, recognizing their “outstanding achievement, dedication to the community and service to the nation.”

The founder of Nuytco, as well as Bowen Island tech industry leader Haig Farris, has been invested to the order this year.

“I did hear some time ago that a fellow that I know – a professor – wanted to nominate me and I said ‘Sure, nominate away,’” Nuytten said.

Some time later, the GG’s office was in touch to ask for help in preparing the short bio that would go in the press release when it would be announced publicly.

“I was very honoured. I said, kind of jokingly, if they picked me for the Order of Canada, then I think they may have made a mistake because it’s quite a high honour. But I’ll tell you what: I’m not giving it back.”

Nuytten was already named to the Order of British Columbia in 1992 and has earned a host of honours from the diving community for his work, including developing a number of submersible vehicles, a submarine rescue system and the Newtsuit, an underwater exosuit.

Nuytten started the first commercial dive shop in Vancouver as a teenager, which he ran after school and on weekends. From there, he started developing his own wetsuits and dry suits. Eventually, graduated to designing and testing more ambitious projects – diving helmets and breathing apparatus. He said he still gets the same jolt from seeing his newest creations work under water as he did his earliest ones. “The rush you get from that, I’ve never gotten over,” he said.

He’s also contributed to National Geographic explorations, provided submarines and diving helmets for film productions including James Cameron’s 1989 sci-fi The Abyss and built the propulsion systems for the remote subs that explored the wreck of the Titanic.

Perhaps less of a spectacle but equally important to his life is his work as an Indigenous artist. A proud Métis and adopted member of the Kwakiutl First Nation, Nuytten apprenticed for years under a master carver in the northwest coast style, which he has kept up and published books on.

When he gets the chance, he’ll sneak away to his carving shop where he carves and restores totem poles and potlach masks.

There is a certain disparate nature about designing submersibles for the navy and carving his own mask to wear during a potlach ceremony dance, which Nuytten said always gives him “a bit of a kick,” yet they do overlap.

“Very often when I’m at the bottom of the ocean, I’m thinking about a new design for a dance mask or a silver bracelet or something like that. And conversely I’ll be sitting in the big house at Alert Bay or Port Hardy or here in North Vancouver with all the music going on and singing and dancing, and I’m thinking about the next rotary joint for an exosuit or something like that. It’s an interesting life.”

At 76, Nuytten doesn’t have any plans to hang up his fins quite yet. He’s still training astronauts, assisting in fisheries research for universities and developing new submersibles for private sector and the world’s navies.

But he also has a number of passion projects under way.

He has plans to curate a collection of more than 100 model totem poles for the North Vancouver Museum and Archives. And he still carries a torch for the creation of a museum dedicated to diving, called the Deep Discovery Centre, where he could publicly display his huge collection of vintage diving equipment, going back to a 1946 aqualung.

“It’s always been a bit of a wonder to me that in the worldwide undersea community, Canada and most particularly the West Coast of Canada, is known for cutting edge innovation in diving technology. But no one in Canada seems to know about it,” he said.

Nanaimo has shown some interest in hosting the museum and he’s also looking at a location near the Vancouver Convention Centre, although his first choice would be to see it built here.

And perhaps most ambitious, Nuytten is proposing something he calls Vent Base Alpha, an underwater colony made to simulate the conditions of Mars and train astronauts for an eventual mission there. Nuytten gave a TEDx Talk on the idea in 2016. He’d like to see it built on the floor of Burrard Inlet, just off the Department of Fisheries and Oceans’ Center for Aquaculture and Environmental Research in West Vancouver, of which he is a director.

While he hasn’t looked at the list of members of the order being invested on Friday, there are a few people he’s hoping to rub shoulders with in Ottawa. Among them, are governor general-designate Julie Payette. Payette was one of the astronauts Nuytten trained to use his submarines and Newtsuit.

“We spent a lot of time with her. She was a superb submarine pilot. Absolutely superb,” he said.

And he already has an ice-breaker prepared if he meets the Prime Minister. “You never know. We might run into Justin Trudeau. I used to go diving with his father. Pierre Trudeau was a fanatic, rabid diver,” he said. “We went on a number of diving trips together.”

Close to 7,000 Canadians from all sectors of society have been invested into the order since 1967.