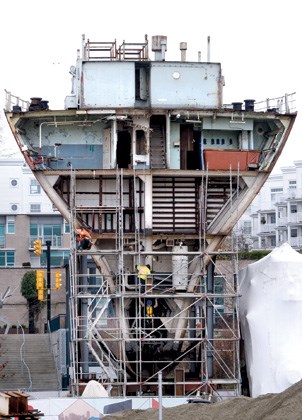 Workers begin dismantling the stern of the HMS Flamborough Head. After sitting on the City of North Vancouver waterfront for the last 13 years, the city is paying to have it scrapped.Mike Wakefield, North Shore News

Heritage preservationists are dismayed to see one of the most recognizable landmarks of the North Vancouver waterfront being brought down.

Workers are in the process of dismantling the stern of the Flamborough Head, the stern of the Victory ship that has adorned Lot 5 of the city waterfront since 2001. The ship was built at North Vancouver's Burrard Dry Dock and launched in 1944.

"Any remnants of the maritime history of that area seem to be disappearing fast and furiously," said Jennifer Clay, vice-president of the North Shore Heritage Preservation Society.

Clay recently signed a letter to the city on behalf of the preservation society asking council to clarify what will happen with Flamborough Head, as well as the PGE railway station building and yellow crane and confirm all three will remain on the waterfront.

"Not only do these structures honour the important and unique shipbuilding and wartime past of North Vancouver, but their retention and integration into the development of the Lower Lonsdale area would have many positive consequences. .. creating an area with real identity and 'sense of place,' rather than just another generic shopping and eating area," the letter urges.

After a behind-closeddoors meeting on Sept. 9, however, City of North Vancouver council voted to spend up to $250,000 to dispose of the Flamborough Head.

The stern was not only out of place, it was putting the city out of pocket, according to Barbara Pearce, the city's director of special projects who is overseeing the re-envisioning of the waterfront.

The stern isn't just a relic of North Vancouver's history, it has become a sad reminder of what was envisaged as an anchor for the redeveloped waterfront: a National Maritime Museum.

The city put the stern on a temporary cradle after receiving it as a donation from the Artificial Reef Society of B.C. in 2001, but when a lack of senior government funding killed the museum plans in 2007, the stern was left to sit on its cradle, which is now reaching the end of its life.

"It basically needs a whole new structure. That would be a significant sum," said Pearce. "We asked council: 'Do you want to invest more on the cradle? Do you see a vision of this on the site? Or would you prefer we dispose of it?'" The city has budgeted up to $250,000 to see the Flamborough Head decontaminated and scrapped. It may sound like a lot, but it was cheaper than moving it a third time and finding another spot for it, said Pearce.

"Frankly, it's full of hazardous materials. There's asbestos. Believe it or not, pigeon carcasses and pigeon poop are considered hazardous materials and there's a lot inside," Pearce said. "All of these things that we're doing now, the hazardous materials cleanup, would have had to proceed and any kind of future structure to keep this on site would have cost considerably more than what it's costing to dispose of it."

The stern should be fully removed within six weeks, Pearce said.

While the preservation society and citizen group North Van Urban Forum have lamented that the discussion happened incamera, Mayor Darrell Mussatto said council had no choice.

Meanwhile, the planning process for what will go on the city's remaining waterfront lands is chugging along. The consultant hired to lead the visioning process has received more than 900 pieces of input which will be pared down based on feasibility and compiled in a report and presented to council in early 2014.