A man was struck in a marked North Vancouver crosswalk Wednesday evening, just as police on the North Shore launched a campaign aimed at keeping pedestrians safe during winter months.
Nov 20, 2015 12:00 AM By: Brent Richter 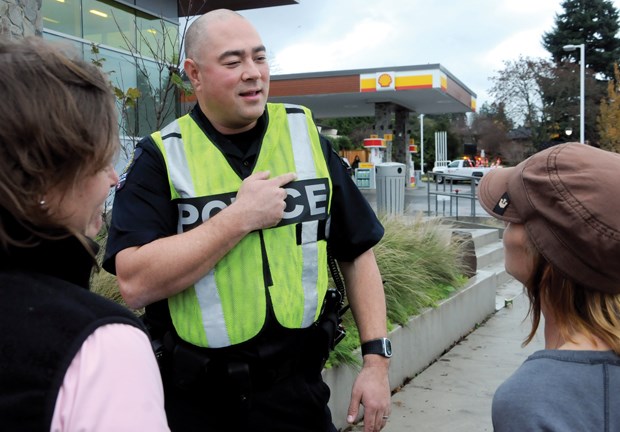 A man was struck in a marked North Vancouver crosswalk Wednesday evening, just as police on the North Shore launched a campaign aimed at keeping pedestrians safe during winter months.

The accident happened as a 27-year-old North Vancouver driver was turning left at the intersection of Chesterfield Avenue and West Second Street and failed to notice a 57-year-old man who was walking across the cross walk.

The pedestrian was taken to hospital after suffering a dislocated shoulder and knee in the accident. The driver was handed a $167 ticket.

This month, police are reminding both drivers and pedestrians that when the sun goes down, the risks go up.

West Vancouver Police, the RCMP and ICBC are making another push to increase pedestrian safety in hopes of warding off some of the injuries and fatalities that spike in the winter months.

“Running all the stats on this, you would be shocked,” said West Vancouver Police Department spokesman Const. Jeff Wood.

On average, 33 pedestrians are killed per year in the Lower Mainland and there are 1,700 injured. Pedestrians make up one in five of the fatalities involving motor vehicles, and the most dangerous months are in the winter as the sun sets early and nasty weather sets in.

The advice for pedestrians ought to be well known, but it bears repeating given the number of incidents, Wood said.

“Do your part and be seen by drivers. Simple things – make eye contact, wear bright, reflective clothing and stay focused on the road,” he said.
“Remove your headphones and leave your phone alone while you’re crossing the road. Before you start to cross, look left and right and make sure there’s no traffic.”

For those who may not have bright, reflective clothing on hand when they’re out and about, police have been handing out yellow reflectors that pedestrians can easily hang from their winter jackets.

But, safety is (pun intended) a two-way street.

“When you’re driving, take extra time to look for pedestrians and before turning, avoid distractions and be ready to yield.”

On Oct. 21 this year, a North Vancouver teen was sent to the intensive care unit with serious head injuries after police say she walked into an intersection while looking at her phone.

In July, a 72-year-old West Vancouver woman died after being struck by an SUV while crossing the street in Ambleside.

Last fall, a 13-year-old girl was rushed to hospital with serious head injuries after being hit by two cars after she darted out between two parked cars near Lonsdale and Chesterfield.