The police are no longer stumped. The Crown has sworn two criminal charges against a man North Vancouver RCMP accuse of cutting down mature trees on public land with no apparent motive.
Aug 23, 2019 6:00 AM By: Brent Richter 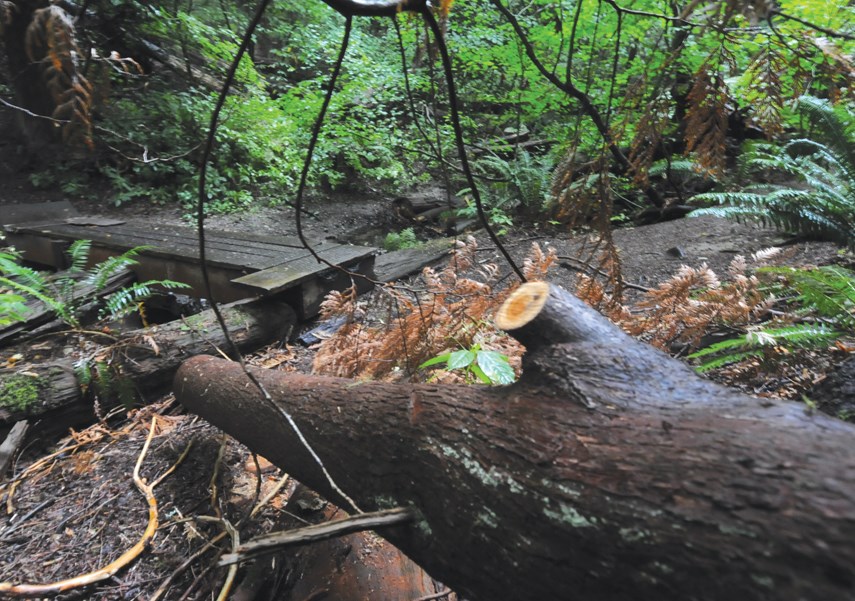 The police are no longer stumped.

The Crown has sworn two criminal charges against a man North Vancouver RCMP accuse of cutting down mature trees on public land with no apparent motive.

On April 21, a District of North Vancouver parks staffer caught a man in the act, cutting down a cedar tree off a trail at the end of Strathaven Lane in the Seymour area.

The district worker called police but the suspect fled before police arrived. A week later, on April 28, there were two more similar incidents off Heritage Boulevard next to Capilano University’s parking lot and near the North Vancouver Cemetery. In those cases, witnesses saw the same suspect with a handsaw and a hatchet.

“We knew who it was based on the file with the parks (employee) and so the next week, when we had two more reports, witnesses were then able to identify him from his picture,” said Sgt. Doug Trousdell, North Vancouver RCMP spokesman.

Police arrested Aaron Michael Andrews, 32, on May 1 and the Crown has since laid two charges of mischief to property over $5,000.

There have been a string of reports of trees being cut down on public land since December 2018.

After news spread, more reports came in from around the area, Trousdell said, but it’s unclear whether the same suspect was involved.

“We’re certainly looking at the connection between that and other unsolved trees that were mysteriously cut down,” he said. “The fact pattern is quite similar but we haven’t been able to get enough evidence to charge the same accused with those past instances.”

While the Mounties believe they’ve got their man, they are still baffled as to why. Most often, when trees are cut on public land, the prime suspect is someone whose view has been improved. But that wasn’t the case at all with the trees cut in the Seymour area.

“I don’t know that we are able to assert a motive. It would appear to be fairly random, the trees that are being selected,” Trousdell said. “He’s not, to our knowledge, stealing or making use of the trees. He’s just cutting down trees.”

In any case, amateur lumberjacking is a very risky activity, Trousdell said.

“It’s obviously very dangerous given that these are trees are on or near people’s properties and the possibility of a tree falling on somebody or damaging property is very real. Felling trees is a dangerous profession that people train for and it’s known to be a dangerous thing to do even for professionals,” he said.

Andrews is due back in court next week. While out on bail, he has been ordered to not possess any tree cutting tools outside his residence and must not stop in any densely forested areas.