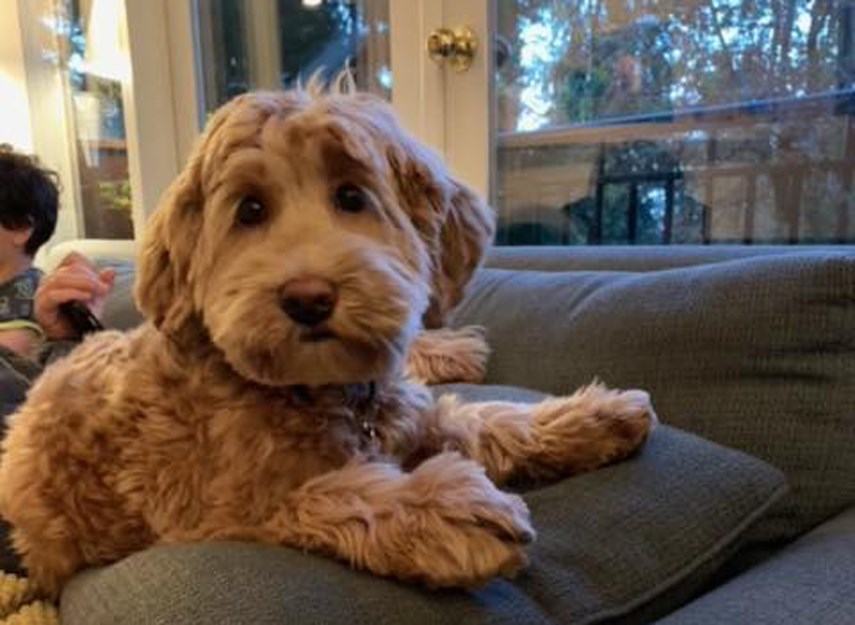 A North Vancouver family is offering a $4,000 reward in an effort to help find their missing pup who vanished on a walk a short distance from their home Nov. 30.

Sharon Gradin was walking Clover, her seven-month-old Australian Labradoodle, with a friend and another dog on an unmarked trail behind DNV Fire Hall No. 3 on the east side of Mosquito Creek around 1:45 p.m. Nov. 30 when the two dogs ran ahead of their humans.

“The water was a bit rough that day, but she didn't tend to go to the water when it was that rough,” said Gradin. “So we kept walking. And then I was calling her and we caught up to the other dog. And then there was no Clover.”

Gradin says she immediately panicked and searched the water – there is a waterfall near the spot where Clover was last seen – but she could find no sign of her dog. She called her husband and they enlisted the help of the nearby firefighters, who began a thorough search of the area while also monitoring the water from the nearby Montroyal Bridge.

“I kept searching,” she said. “Every day I've been searching.”

Many others have joined in the search, including dozens of volunteers from the community along with professional trackers with search dogs, as well as people armed with avalanche probes who have been inspecting the water up to a dam downstream that Gradin says would have snared Clover if the dog had drifted down the creek.

“There’s no body, there’s nothing,” said Gradin. “There’s a lot of scenarios that are going through my mind. Did she fall in the waterfall and is she stuck in the waterfall? … And then there are people saying she’s such a cute dog, [maybe] someone took her. But I just don’t know if I buy that story because of where we were.”

Since Nov. 30 there have been no confirmed sightings.

“I keep getting sent the same picture of a dog in Mission – it is definitely not Clover.”

Gradin said at this point she just wants some closure one way or another.

“It’s just very confusing,” she said. “It feels like she vanished out of thin air. It’s weird.”

Anyone with information about Clover can contact Gradin at 604-404-3616. The reward will be offered, no questions asked, to anyone who brings Clover back alive, Gradin said.