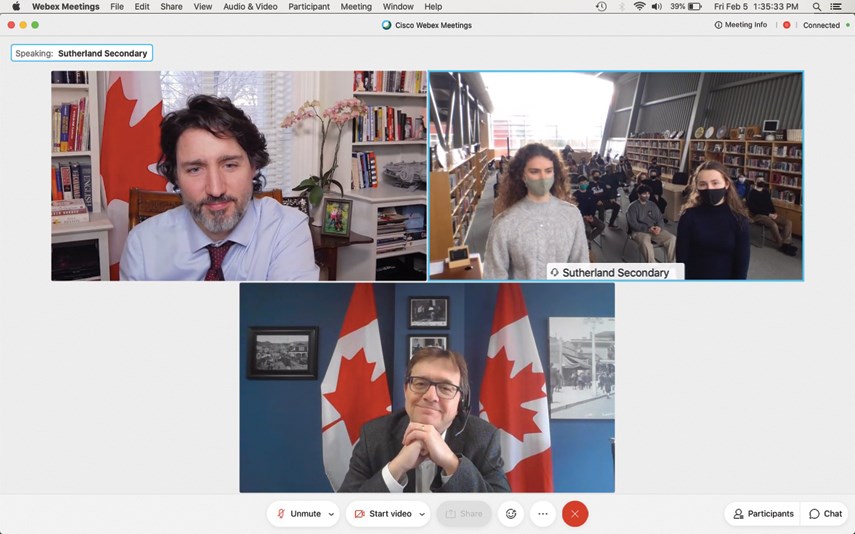 Trudeau spent an hour in the afternoon taking tough questions from Grade 11 social justice students and providing his answers.

Two days before the event, staff from North Vancouver Liberal MP Jonathan Wilkinson’s office contacted Sutherland’s principal and asked if they’d be interested in a quick Q&A with a “high-ranking government official.” The students pooled together a list of questions, but it wasn’t until later they learned the official would be the prime minister.

The students did not shy away from tough questions for the PM, including asking him to account for continued boil-water advisories on First Nations reserves when Canada has the largest supply of fresh water in the world.

Trudeau said the very problem of a lack of potable water on reserves speaks to how badly the relationship between First Nations and the federal government had deteriorated, something his government was trying to correct.

The government will not meet its goal of having every boil-water advisory lifted by March of this year, as they had campaigned on, which Trudeau said was a frustrating outcome of COVID-19. But he noted that of the 100 First Nations under boil-water advisories since he took office, about 90 have since had them lifted.

“You can’t do it by just sending in a purification plant and walking away. It involves investing in infrastructure, investing and supporting them and governance, helping train, so they can have their people doing the work and maintaining it… at a level of autonomy that's going to keep that going,” he said. “It is both something that is substantially really important but also very symbolic of the reconciliation that needs to happen.”

The students also pressed Trudeau on systemic racism, which he quickly acknowledged.

“The system works exactly the way the system was designed. It was just designed the wrong way, with the wrong people in mind. It wasn't designed to actually lift up people who were facing greater barriers and more challenges because of the system itself,” he said.

Trudeau said he has made representation of women and racialized Canadians in government a priority. And his government has set up a program to fund Black entrepreneurs and is working to eliminate mandatory minimum sentences in the criminal justice system that have resulted in over-incarceration of Black and Indigenous youth, he added.

Trudeau added every Canadian must challenge their own unconscious biases and listen to the lived experience of racialized Canadians.

“Certainly I've been through my own well-publicized moments of real stupidity and blindness,” he said, referring to his wearing of black- and brown-face costumes while working as a teacher. “The microaggressions and daily discrimination that racialized Canadians go through that non-racialized Canadians don't even see, it's a huge challenge.”

Not every question was so serious, however. Two students asked how dogs would wear pants, if indeed dogs could wear pants, and another pair wanted to know what the Queen is like in person.

The PM, who said he has watched The Crown on Netflix, laughed when asked. He said he speaks with her over the phone every six months and has typically sat down with her for meetings once a year.

Following the meeting, the students largely agreed that Trudeau did well speaking to their concerns, although they would like to have seen more detailed policy actions.

“I thought he did a great job of taking accountability, and saying how the system has been very broken. But I think he could have addressed the next steps a little bit more explicitly,” said student Ruben Hari.