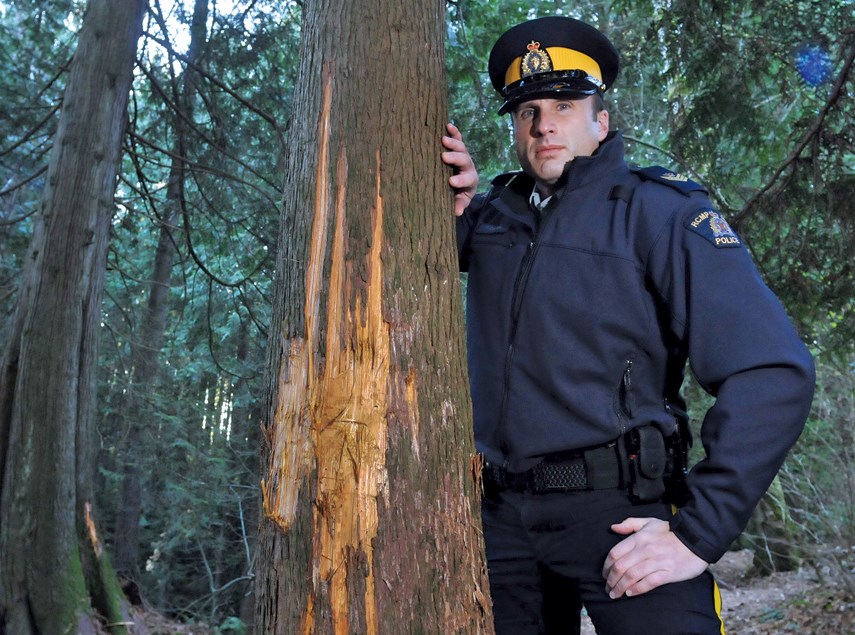 North Vancouver RCMP are investigating after someone apparently strolled through Princess Park stripping swaths of bark from mature trees.

According to the District of North Vancouver, 35 to 40 trees were found damaged over the last 10 days, most of them hemlock, douglas fir, and cedar although some deciduous trunks were also attacked.

Coun. Jordan Back alerted staff to the issue after his walk through the park on Monday.

By then, a resident had already gone to the trouble of printing signs warning others of the vandalism and asking park users to keep an eye out.

It appears someone used a tool to strip the bark off, although police say they have no idea who would be beavering away on public property, or why.

“There are no witnesses, no video surveillance and we don’t have any suspects at this point,” said Sgt. Peter DeVries, North Vancouver RCMP spokesman. “Our serious crimes unit has looked at it just in the context of other similar things that have happened but, so far, there has been no connection that we’ve been able to find.”

Most of the trees with the bark stripped from them are on the main trail on the north side of the park.

The trees are unlikely to die as a result of the vandalism but they are now at greater risk, said Courtenay Rannard, district spokeswoman.

“Structurally, the trees are fine; however, the openings in the bark can act as a path or entry point to disease and pests. Our parks staff will be recording and monitoring the trees regularly to help prevent this from happening,” she said.

DeVries said police will be working with park rangers to see that no more trees are damaged.

“If anyone saw anything in the last 10 days, or any suspicious people or anyone in the area who might have had tools, please contact us.”