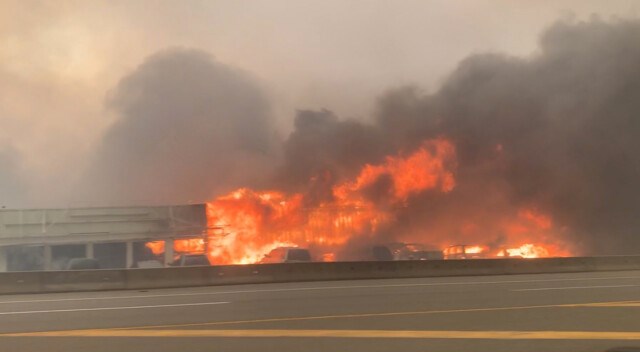 A building in Lytton, B.C. is consumed by flames on Wednesday, June 30, 2021. Several DNV firefighters are now working with the B.C. Wildfire Service, as a structural protection unit near Lillooet. 2 Rivers Remix Society

District of North Vancouver Fire and Rescue Services members are shipping out of town to help out in the fight against wildfires, which have begun a particularly early and vicious 2021 season.

Five members were seconded by the B.C. Wildfire Service to work as a structural protection unit – a team trained to save buildings from advancing flames, using a sprinkler system.

Together, they can protect about 50 homes or critical infrastructure buildings at any one time, said assistant chief David Dales.

“They deployed those firefighters initially to Kamloops. And then they were redirected to an area north of Lillooet to support critical infrastructure,” he said.

That’s not all, though. On Friday morning, the department’s chief Brian Hutchinson left town for the 100 Mile House area, where he is now in charge of an incident command position.

And several assistant chiefs have been told they should be ready to redeploy.

How residents of Metro Vancouver can help those who evacuated the Lytton fire
Jul 2, 2021 3:17 PM