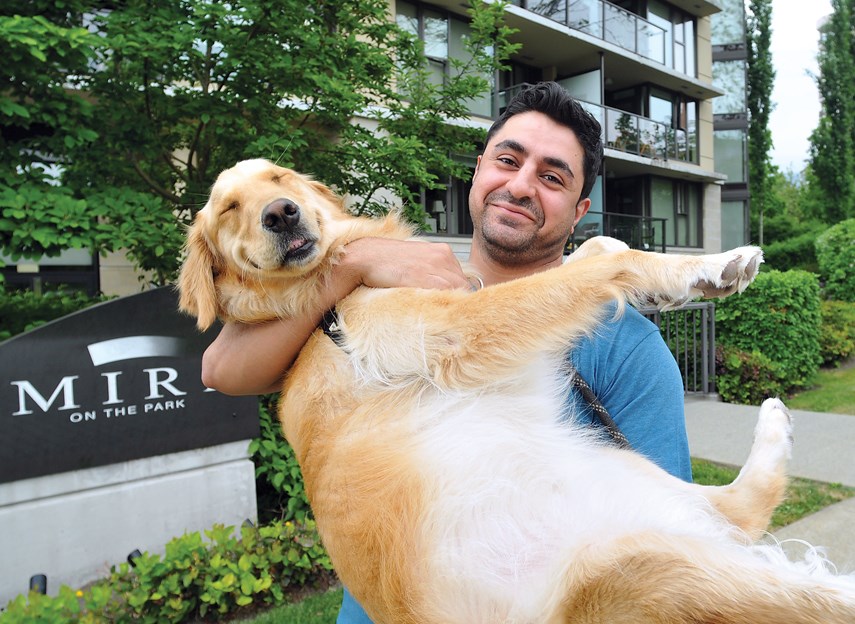 A Central Lonsdale man has won his battle with his condo’s strata council who told him he’d have to get rid of his golden retriever Zoey after she grew out of puppyhood.

Parham Esfahani bought his condo in Mira on the Park, at the east end of Victoria Park in the spring of 2016. But soon after he got Zoey, he was told by the strata council that she would be in violation of the building’s pets bylaw, which states: “one small dog or cat is permitted; small being defined as an animal that can comfortably be picked up and carried.”

On Dec. 22, 2016 he received a letter informing that he must have Zoey removed from the property no later than June 30, 2017. Three days before the deadline, he received another letter warning that he could be fined $200 every week until the dog was gone.

“They were very adamant I could not stay in the building with the dog,” Esfahani said. “This was my first real family pet and I couldn’t have asked for more. I really lucked out with her in particular.”

Instead, Esfahani decided to fight the bylaw at the province’s Civil Resolution Tribunal.

Esfahani argued the language of the bylaw was lacking objective, tangible criteria, and therefore was too vague to be enforceable.

To illustrate, he shot a video of himself and his fiancé each lifting up Zoey and walking with her.

The strata argued that many organizations, including the American Kennel Club, list golden retrievers as being large dogs.

“The strata says that I should not look to the literal meaning of the criteria for ‘small’ as written in the pet bylaw but rather should consider the spirit of the pet bylaw,” tribunal member Maureen Baird wrote on her ruling released last week.

Baird sided with Esfahani in the dispute.

“Applying the literal meaning of the words, there is evidence that the applicant can pick up and carry the dog. Comfort is a very subjective factor, but there were no signs of distress shown by the applicant when he was holding the dog in his arms. It is true that the dog squirmed when being held up in the air and this might mean that it was not under control. But control is not a component of the pet bylaw definition,” Baird wrote. “In the present dispute, I find that there are sufficient uncertainties in the language of the pet bylaw that a reasonably intelligent person would not be able to determine the meaning. There is no objective criteria to determine if a dog is or is not in compliance with the bylaw.”

The strata may write a new bylaw prohibiting large dogs, but Zoey would be automatically grandfathered in, Baird ordered.

Baird gave the strata 14 days to reverse any fines they may have issued and ordered them to reimburse Esfahani the $225 he paid in tribunal fees.

In an interview, Esfahani said he and Zoey have never had a dispute with any of the other residents in the building. Zoey has been through obedience training and rarely barks, he said.

Esfahani admitted that he misunderstood the bylaw when be bought Zoey as a pup, but he said he fought the bylaw on principle.

“There’s no point in having legal language if it is not clear; otherwise, we can just talk about laws and we can all interpret them in our own way,” he said.

Esfahani said he is now planning to run for a spot on his strata council, looking to make his building more pet friendly. Stratas, he said, tend to attract people who are overzealous and heavy handed.

“If people don’t have the time and don’t have the will to fight (their strata), they can get away with anything they want – anything a group of a few select people want – and that’s just not right,” he said.