The campaign to help a North Shore Rescue volunteer’s family as he goes through cancer treatment has met its $60,000 fundraising goal and then some, all in less than week. “It’s mind boggling. We’re floored,” said Jay Piggot, searching for words.
Dec 13, 2015 12:00 AM By: Brent Richter 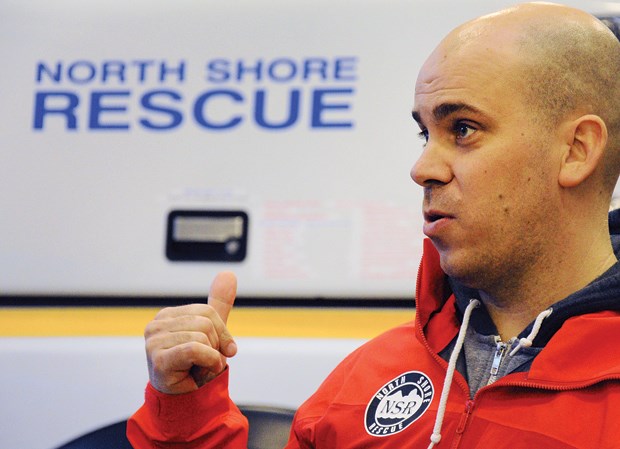 The campaign to help a North Shore Rescue volunteer’s family as he goes through cancer treatment has met its $60,000 fundraising goal and then some, all in less than week.

“It’s mind boggling. We’re floored,” said Jay Piggot, searching for words. “Never in my wildest dreams would I have expected the community and complete strangers to come out and support me like this.”

The 10-year veteran volunteer with North Shore Rescue and paramedic was diagnosed last week with a rare and difficult to treat form of cancer. Given his part-time status with B.C. Ambulance Service, he is not eligible for sick pay.

His North Shore Rescue teammates quickly pulled together a press conference on Sunday asking for donations to help support Piggot’s family while he goes through treatment. By Friday afternoon, that had reached more than $83,000 from online donations plus another $9,000 donated to a trust set up by BlueShore Financial.

While friends and family have contributed, most of the donations have come from complete strangers. And a great deal of them have been anonymous, so Piggot does not even know who to thank.

Piggot has received messages from folks saying he’s an inspiration for them, which he said has been the best thing he could hear in the situation. That said, the inspiration is mutual and the donations mean the Piggot family won’t have to worry about money while he goes through treatment.

“Just having the support from the community and North Shore Rescue has really allowed me to have an uplifting attitude and a positive chance in all of this,” he said. “I just want to focus on the task at hand right now, which is beating this so I can get back out into the field and start doing my thing again.”

More than setting up the fundraising campaign, Piggot said his North Shore Rescue teammates have been helping with everything else at such a difficult time, from taking care of the kids to walking the dog.

“The team – these guys have full-time jobs, they’re doing their regular duties at North Shore Rescue but they’re also helping my family out,” he said, adding how grateful he is for the support.

Piggot just finished his first day of chemotherapy treatment on Friday, something he expects to weather over the next five months, now that he has some solid footing. “So far, so good,” he said. “My wife is pretty optimistic now and obviously so am I. The kids are getting better every day.”

Donations can be made at rescuetherescuer.ca or through BlueShore Financial.