Rave reviews are pouring in for the new Seymour Suspension Bridge. Metro Vancouver officially opened the 73-metre long, 2.5-metre wide rigid suspension bridge the week before Christmas and trail users of all kinds have been flocking to the site.
Dec 24, 2018 11:53 AM By: Brent Richter 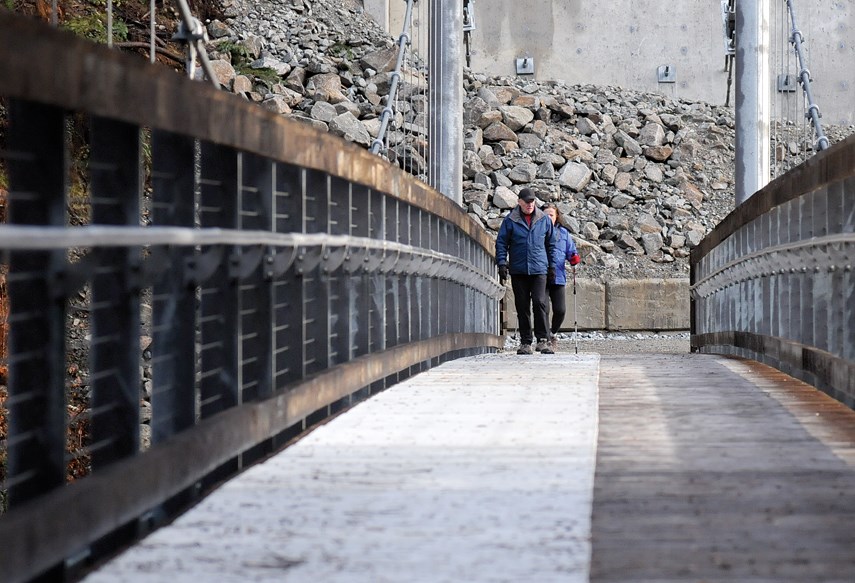 Rave reviews are pouring in for the new Seymour Suspension Bridge.

Metro Vancouver officially opened the 73-metre long, 2.5-metre wide rigid suspension bridge the week before Christmas and trail users of all kinds have been flocking to the site.

The bridge allows hikers, cyclists and dog walkers to cross the Seymour River and reconnects the Twin Bridge Trail with the Fisherman’s Trail.

“I think people are just ecstatic about it,” said Eric Godot Andersen, president of the Blueridge Community Association. “Four years is a long time. I just realized when I went there how much I had missed it over the years.”

In December 2014, a massive rock slide choked off the Seymour River just south of the former Twin Bridges location and, briefly, it went from a bridge over troubled water to a bridge under troubled water.

When the water levels dropped again, Metro engineers determined the old bridge would have to be removed for safety reasons.

But it took almost four years to come up with the designs, find a contractor and get the work done. Work was delayed in 2017 when none of the contractors bidding on the project came in within Metro’s budget.

Eventually, the contract was awarded to North Vancouver’s Surespan Construction and work began in May. The total cost came in within the $2-million budget, according to Metro.

The bridge can be reached on foot in about 15-20 minutes, hiking along the Twin Bridges trail from the Lower Seymour Conservation Reserve parking lot at the top of Lillooet Road or on the Fisherman’s trail at the top of Riverside Drive.

“It’s taken a little longer than expected but I think in the end, they’ve done a good job,” said Brian Gardiner, a Blueridge resident.

The area has always been nice, Gardiner said, but he’s really looking forward to when all of the landscaping is done and the natural vegetation has grown back in.

Opening day was marred by a heavy windstorm that brought down trees and branches on the trail but it didn’t dampen the experience for Norm Lee, one of the first people to cross on Dec. 20.

Lee, who hits the trails two to three times a week, found the crossing stable, despite the blustery conditions.

“I was actually hoping it would be more shaky, as a suspension bridge,” he added with a laugh.

But Lee worried aloud if the bridge might end up being a little too popular for its own good.

“I think there are pros and cons. I’ve talked to other hikers and runners and bikers. The nice thing is access. The bad thing is access – because now everyone’s going to be on there,” he said.

Andersen said it may well result in more people coming through the Blueridge neighbourhood but he’s more excited about what the bridge means for trail users.

“I think we’re well prepared for the many years ahead of us with hopefully lots of good walks for everyone and good rides for the bikers. It’s great. It’s been really missed and it’s nice to see it come to fruition,” he said.

In addition to the Seymour Suspension Bridge, Metro Vancouver has also opened a new Canyon Creek Bridge to the trailhead at the top of Riverside Drive and a new staircase on the Baden Powell Trail, both improving access to the Lower Seymour Conservation Reserve.

Everyone and their dog & horse ventured out early this morning to cross over the newest #bridge from #lynnvalley to #Seymour with a new entrance to #Bottletop Trail, I took my bike today. #lscr #northvan pic.twitter.com/VkX2HXjYN3