The public will have the chance to further voice their concerns or support for the Cascadia Green redevelopment in North Van's Moodyville area later this month.
Nov 23, 2020 6:05 PM By: Elisia Seeber 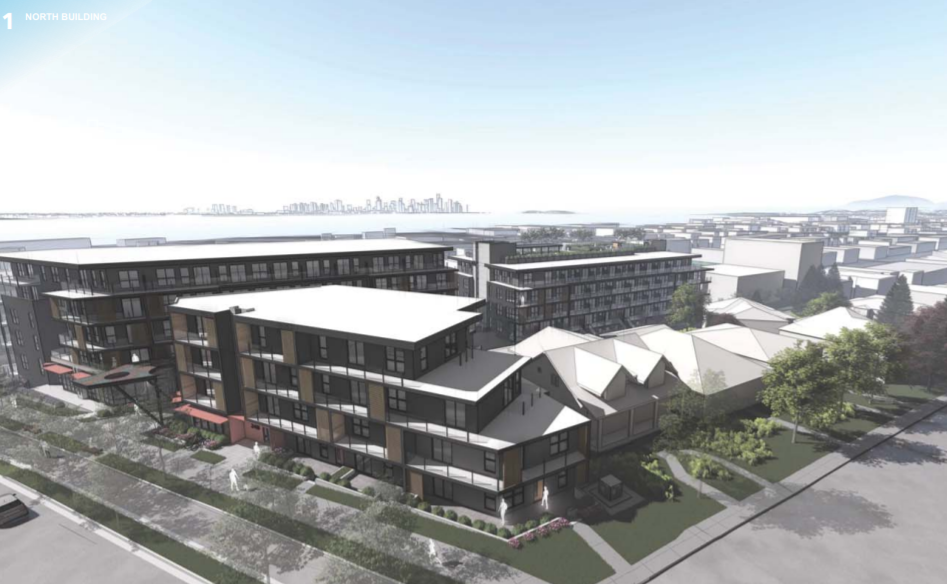 Editor's note: The headline on this story has been amended to remove a reference to the project's height. In the City of North Vancouver, buildings are measured from the high side of the site. The proposed East building is five storeys based on the height measured from the lane side. Due to the slope of the site, it presents as a six-storey building along East Third. The story has also been edited to include more details about the proposal.

Residents in the Moodyville area are calling on the City of North Vancouver to “preserve the character of their neighbourhood” with the proposal of a new development they say is set to “cast a shadow” over their homes and lives.

The public will have the chance to once again voice their concerns or support for the Cascadia Green redevelopment at 402-438 East Third Street and 341-343 St. Davids Ave. next week.

After a robust discussion at the Nov. 16 general meeting, council voted to move forward with a public hearing on the developer’s application to change the land use and permitted height in the city’s official community plan and zoning bylaw, which would allow the development to go ahead.

The proposed changes would give the developer permission to increase from four storeys to five storeys as well as add a commercial laneway and extra retail and office spaces to the development.

In the report prepared for council, staff said they supported the OCP amendment, stating it would “increase the commercial component in the development to provide significant amenities to the Moodyville area.”

Staff also highlighted the inclusion of childcare, improvements to active transportation infrastructure and intersections, and housing pilot programs were all consistent with the City’s policy framework.

"The form of development has also been evaluated and considered appropriate in the site context," the report states.

"On balance, the proposed application will support the continued growth of Moodyville into a more sustainable neighbourhood - environmentally, socially, and economically."

Members of the surrounding community already voiced both grievances and support for the developer’s proposal at a town hall meeting in November 2019 – with more than 85 comment sheets and emails submitted after the event, with 23 expressing opposition and 62 expressing support. A virtual town hall was then hosted in July this year, to provide an update on changes to the proposal which resulted in a further 316 comments.

Those in support have praised the project for offering relatively affordable housing, with a Rent-to-Own and Affordable Home Ownership Program, its pedestrian orientated design and the proposed mix of neighbourhood retail and restaurants.

Residents in opposition are hoping council will make developers stick to the original plans.

More residents came forward to speak against the OCP amendments at the Nov. 16 council meeting, echoing the same key concerns about the heights, size, and shadow impacts of the three buildings.

Residents in opposition fear the massive development will impact traffic, on-street parking, privacy and noise in area. The community is also worried the development would put pressure on Ridgeway Elementary, which is already at capacity.

Jeff Murl, an East Fourth Street resident, said the current plan being proposed dramatically altered the “density, form and character” of the neighbourhood.

Murl argued the change was not “marginal” and the new plan proposed five times the residential density and 10 times the commercial density of the OCP.

“What is proposed is seeking to overwrite the hours of work and consideration of public input already encapsulated in the OCP,” he said.

Murl said the neighbourhood was not “looking to be an experiment” when it came to the activation of a laneway behind their homes, suggesting the nearby TransLink bus depot site, zoned for commercial, was the better retail development option.

Fellow resident Brian Charleton, who bought into the neighbourhood in January, said he was previously aware of the four-storey development before purchasing, but was astounded to find out the potential height changes could mean he’d have an almost 70-foot building towering over his home in the future.

“The only time we will see direct sunlight is during the summer solstice, all other seasons of the year we will be shaded,” he said.

Staff say since consultations with the community a number of changes have been made to the application, highlighting the North building has been redesigned in order to respond to the neighbouring houses along East Fourth Street, site circulation has been improved to significantly calm traffic surrounding the site, and the childcare space is now located at the breezeway, away from East Fourth Street.

But East Fourth resident Melissa McConchie, who has written twice to the city to voice her concerns and spoke at Monday’s meeting, said the adjustments weren’t good enough.

“We’re not anti-development but this proposal is just way too big for our neighbourhood and it will have a significant negative impact on my family and the other families who live on this street,” she said.

“Particularly because we’re on the south side of Fourth Street, these buildings are literally directly in my backyard – our duplex is going to disappear in a sea of buildings.

“If approved, this will turn our quiet, residential street into a busy commercial zone with 30,000 square feet of commercial space along Third Street, St. Davids Avenue and our laneway.”

She said the community just wanted “city council to preserve the family character of this street.”

“This is a great neighbourhood and it would be a tremendous shame to see it completely overhauled when the official community plan already provides the roadmap for how to balance the need for new development with the impact on existing residents,” McConchie said.

At Monday’s general meeting, the vote to move to the public hearing was carried five to two. Coun. Jessica McIlroy was happy to move forward, saying she’d like to hear more from the public and staff on the development.

“We have heard concerns from members of the public about the project, but I feel that the application has gone through the necessary steps to move to a public hearing,” she said.

Meanwhile, Coun. Holly Back was “quite concerned” about moving the application forward. She had similar issues with the project as the community, including a fifth storey being too high, future overcrowding at the local school, and the increased size of the development compared to the original plans.

With similar concerns about the heights and size of the development, Coun. Don Bell, who had also previously opposed the project, voted against moving forward to a public hearing, agreeing with the community that the development would change the area’s character.

“I think this project is too dense for that site and too massive in terms of form,” he said, mentioning he also wasn’t convinced it was the right spot to introduce a commercial laneway.

“I think the project is, you know, attractive and I would have liked to have seen it kept within the OCP limits.”

The virtual public hearing has been set for Nov. 30. Click here to register and for more project details.