The Lower Mainland’s municipal leaders are taking some heat after voting themselves a surprise golden handshake, although the North Shore’s mayors are split on the issue.
Mar 29, 2018 6:00 PM By: Brent Richter 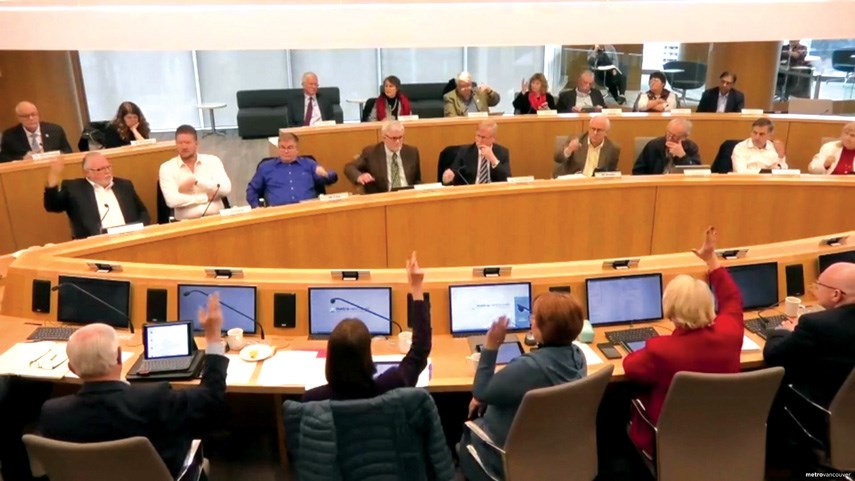 The Lower Mainland’s municipal leaders are taking some heat after voting themselves a surprise golden handshake, although the North Shore’s mayors are split on the issue.

On Friday last week, the Metro Vancouver board voted to give themselves a 15 per cent raise, and as part of the same motion create a “retirement allowance” giving outgoing directors a lump sum payment of $1,100 per year they have served retroactive to 2007.

Metro staff say the cost of the retirement allowance will be approximately $498,000 upfront with an annual financial impact at approximately $62,500. Because Mussatto and Walton have multiple terms in office and have both announced they won’t be running again, they will be entitled to $12,000 each.

The 15 per cent bump in the stipend is meant to offset a change in the last federal budget, which stripped away a tax writeoff for elected council members’ salaries to cover the cost of expenses. Under the decades-old tax break, council members did not pay taxes on a third of their income.

“I think that it’s entirely inappropriate for elected officials to be setting their own pay scale,” he said. “The idea that they would do it retroactive back to 2007 is a complete affront to taxpayers in Metro Vancouver – probably unheard of in most jurisdictions in Canada.”

In an interview, Walton said, though it was a controversial vote, it is not a “good-guy, bad-guy” story as there is great disparity in how council members are compensated around Metro Vancouver. “People responded to it quite differently. I, at this point, thought there should have been perhaps some broader discussion and I was concerned about the process but I really don’t want to comment beyond that,” he said. “I can argue both sides of this, quite frankly. I just happened to vote no.”

West Vancouver Mayor Mike Smith, who did not attend the meeting, took a less nuanced position, saying it was “blatant pork barrelling” and “a total disgrace.”

Smith sent Booth in his place because, when he reviewed the Metro board agenda before taking off for Hawaii for Spring Break, there was no mention of remuneration or a retirement allowance.

“Honestly, if I’d been there, they would have had to call the riot police. It’s just completely everything that I hate about politics where these people piously talk about how they’re all doing this not for their own advantage, you understand, but to serve the public. Yet they stick their nose so deep in the trough it just makes you sick,” he said. “They’ve been politicians too long. They’ve forgotten how hard people work to pay their taxes.”

Smith also called the bump in remuneration “a crock,” saying directors are already paid by their own municipalities and that they have been getting expenses reimbursed and tax writeoffs for years.

“I’ve been to some of these Metro meetings and they last half an hour and you get $375 or whatever it is,” he said.

Smith said he plans to give his fellow mayors an earful when he returns from vacation and “shame” them into revisiting the decision at the next Metro board meeting.

Mussatto did not speak to the motion before voting for it and did not respond to a request for an interview.