Almost a year since the day Mike McIntosh was killed while riding his bike on West Esplanade, friends are hosting a ride to honour his memory and help ensure that no one else dies in the same way. On Jan.
Jan 23, 2020 2:16 PM By: Brent Richter 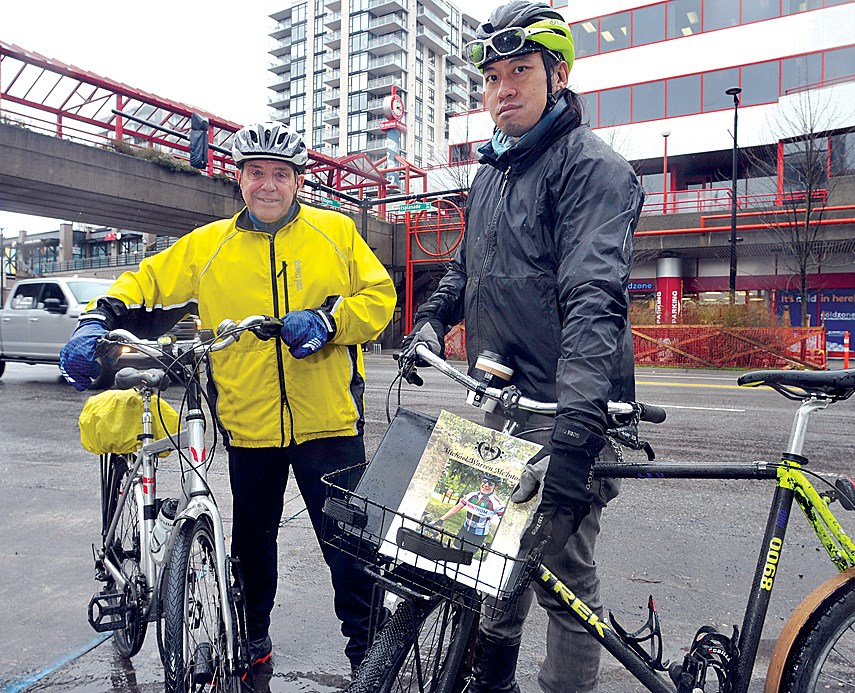 Almost a year since the day Mike McIntosh was killed while riding his bike on West Esplanade, friends are hosting a ride to honour his memory and help ensure that no one else dies in the same way.

On Jan. 26 2019, McIntosh was on his way to volunteer at Kickstand, the non-profit community bike shop in East Vancouver, when he was the victim of a chain reaction crash. It began with someone in a parked car opening their door into the bike lane and ended with McIntosh being knocked into the path of a heavy truck.

On Sunday, the group will rally from Kickstand’s shop at 1187 Parker St. and ride to Lower Lonsdale, where he was killed.

“It’s our way of honouring [him] and bringing awareness to the injustice that this happened to Mike on the road when this shouldn’t happen to anybody,” said Sarah FioRito, one of McIntosh’s Kickstand teammates.

Ari Ng, a friend and fellow volunteer, described McIntosh as a dedicated helper at Kickstand, as well as a committed advocate for road safety and cycle commuting.

“He was a man of strong action as well as being one of the kindest people that I’ve had the privilege of meeting down at Kickstand or in Vancouver,” Ng said. “When he’d be volunteering in the shop or helping somebody out with their bike, you could really tell he was in it 120 per cent for you.”

Organizing a memorial ride for a friend is exactly the kind of thing McIntosh would have done, Ng added.

Kickstand is kicking off the ride with coffee and snacks at 11 a.m. At 2 p.m., riders will stop at Wheelthing bicycle repair shop on the 300 block of East Esplanade, where there will be a toast to McIntosh. From there, the group will go on foot to the 100 block of West Esplanade where McIntosh was killed, to install a “ghost bike” – a bicycle painted all white and locked near the site of a cyclist’s death as a memorial and reminder to others.

The City of North Vancouver’s bicycle master plan identifies that stretch of road as a “network gap” in its mobility network.

Karyn Magnusson, the city’s deputy director of engineering, said preliminary concept design of a priority bike lane for Esplanade began in 2019 with a bike ride of the route by city staff and HUB cycling group representatives.

Consultation with the broader community, including businesses, residents, transit operators, riders and members of the trucking association, will begin this spring, said Magnusson, with construction slated for 2021.

Ng said he knows what he wants to see.

“Separated bike lanes is my short answer to that,” Ng said. “It would make it safer for everyone. It would make more people travel by bike or alternative local transportation.”

FioRito said she hopes the ride will help jolt people out of their complacency towards deaths of cyclists.

“I think this is a very accepted part of car culture. People think that it’s normal and OK. … We don’t think this is acceptable,” they said. “This isn’t negotiable. Nobody should be leaving their house to get somewhere they need to go and be getting killed. Period.”

Fixing the problem would mean changes in road and intersection design, speed limits and bicycle infrastructure, FioRito said. Painted bike lanes along parked cars leave no margin for error for the cyclist, they added.

While the ride is in McIntosh’s name, FioRito said anyone who has lost a loved one on the streets is invited to join.

In July, the Crown swore one charge of unsafe opening of a car door against Patrick Timothy Colwell, 59, of North Vancouver, related to McIntosh’s death. Colwell pleaded not guilty and will face trial in June. He faces a fine of $81 if found guilty.