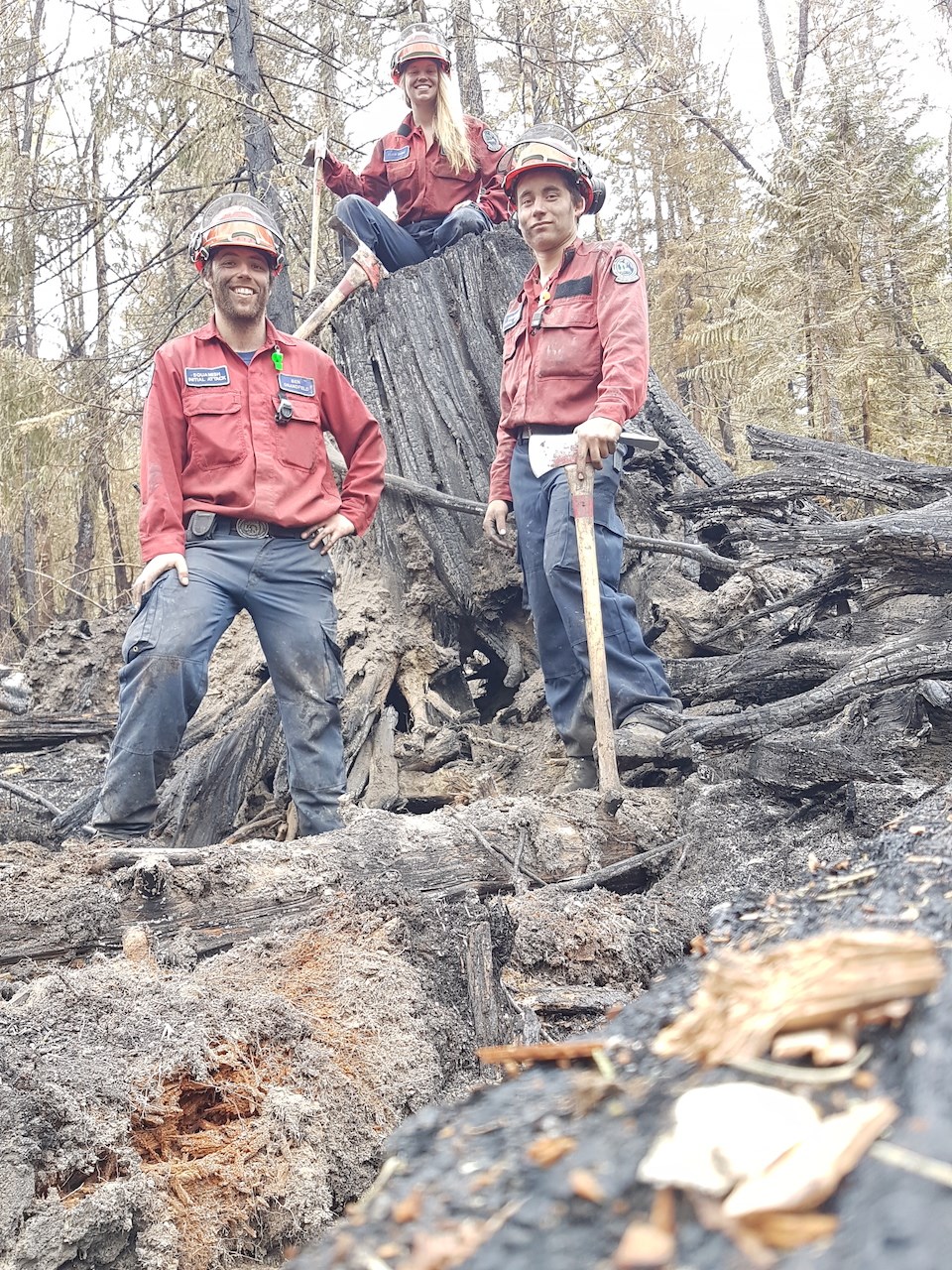 Each fire season, the BC Wildfire Service employs approximately 1,000 wildfire fighters, including many in Squamish.

The three make up the “Coast Golf" crew, with Grandfield as the initial attack crew leader. He has been with the provincial wildfire service for seven seasons.

Dube, a recent Quest University grad, has been with the service for six and Tetreault, who is building a tiny home in the off season, has fought wildfires for three seasons.

The Chief recently caught up with the trio just after they made it back to their Squamish office, after fighting the Upper Squamish Valley Magee Road fire, which began April 15.

What follows is an edited version of that conversation.

Q: What is it like to be fighting a fire that is in your hometown; especially given this was the first major wildfire of the year in B.C.?

Grandfield: When you look out the window of your home and you can see the big smoke column, you know you are going to be the one getting the phone call to go fight it. We always take it seriously, regardless of where we are. With the Magee Road fire being that close to town and threatening peoples' homes, we take that very seriously and do our best.

It is really hard for when we are not able to save all the structures.

Dube: I had previous experience with fires threatening my last hometown, Burns Lake — they were pretty big fires.

It is always quite difficult because you know people affected or you know a friend of a friend who is heavily affected. And lots of people ask you each day about what is happening with the fire.

But you are never the only one fighting a fire. You all work together as a team to get everything done as quickly as possible. At the end of the day, we just have to do our jobs as well as we do everywhere else.

Q: What is it like to fight a fire during a pandemic?

Tetreault: It is the same, except that we couldn't shake hands and that kind of thing. We hadn't seen the other crewmembers for a year, so you want to shake their hands and be pals, and you can't.

Grandfield: You try to be as cognisant of the virus as you can be. Instead of the handshake and the pat on the back that it used to be, you stand and give a wave and say hello.

Q: What would you each like the public to know that you think maybe they don't know — about fire fighting or about fire?

Grandfield: I would say definitely to obey the fire bans.  Also, if you are a property owner, look up the BC FireSmart program. It teaches how to prepare properties for a wildfire.

That way, when come in, our job is easier. Some of the things that don't help are, for example, if firewood is stacked up against a house. Things like that make our jobs more difficult, if we do have to protect a structure.

It is nice when we get to a property and they have FireSmarted it.

Tetreault: Even if a fire ban is not in place, consider if a fire is wise or not.

I live on a ranch and my landlords are good, they always come ask me if it is a good time to burn or not, even when no bans are in place. They are considering all the factors not just the date bans are put in place. Get information. Don't be too eager.