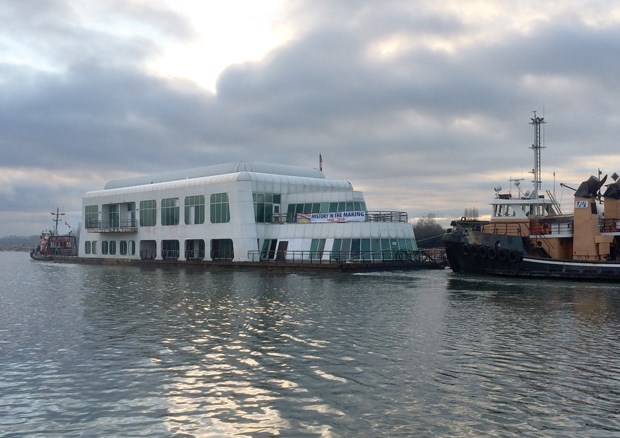 A super-sized makeover is on the menu for “McBarge.”

The dilapidated, graffiti-covered floating restaurant built for McDonald’s for Expo 86 that’s been anchored in Burrard Inlet since 1991 will be towed to a shipyard in Maple Ridge to undergo a $4.5-million refurbishment.

West Vancouver developer Howard Meakin, whose company Sturgeon’s Development owns the iconic piece of Expo history, said the hulking barge was scheduled to be moved by tugboats Monday but the voyage was temporarily postponed due to weather and tides.

Once at the shipyard, Meakin said the barge will undergo a complete refit and be restored to “its original exterior look.”

When it debuted at the World Fair in Vancouver in 1986, the floating fast-food restaurant was officially named Friendship 500 but also known as “McBarge” and served nearly 1,500 meals per day.

The bistro-style floating restaurant was staffed by employees dressed in nautical-themed uniforms. Fries, burgers and other McDonald’s favourites were delivered to the front counter by conveyor belt.

A few years after Expo, the barge was towed from False Creek to Burrard Inlet near the shoreline in Burnaby, where it has become a target of vandals and souvenir hunters through the years.

Meakin has owned the barge for 16 years.

Previously, McBarge was the centrepiece of a proposed $10-million floating restaurant and marina project on the waterfront in Mission, but it never materialized after years in the planning process.

Meakin isn’t offering any information about future plans for McBarge, for now.

“That’s about all I can say right now,” said Meakin.

“I’ve had a few opportunities over those 16 years and this is by far the best one coming up. I can’t go into a lot of details on it but it will come out (early in 2016) in terms of what we’re doing with it.”

Meakin did note that the 30th anniversary of Expo is approaching and there are four remaining structures from Vancouver’s World Fair, including BC Place, Canada Place, Science World and McBarge.

“So it’s our plan to do the restoration and we have a number of communities that are excited about seeing the barge restored and there are a lot of things that are going to follow as a result of what’s happening.”

McBarge is built mainly of steel and concrete and Meakin said marine surveys show its “hull is in near pristine condition and the super structure is structurally sound.”