Local animal lovers are again calling for a ban on rodenticides after a healthy barred owl nearly succumbed to rat poison in a North Vancouver park twice in the last month.
May 6, 2020 6:00 AM By: Brent Richter 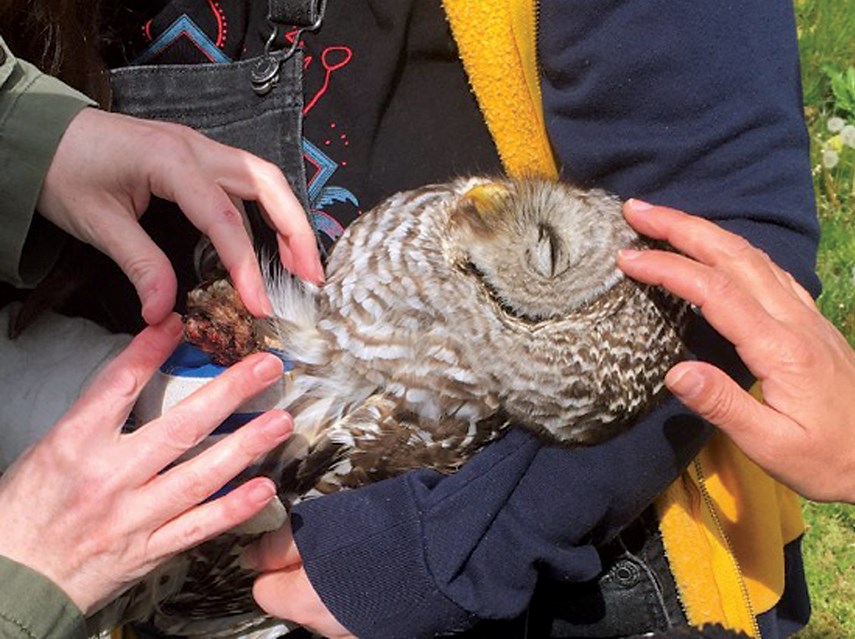 Local animal lovers are again calling for a ban on rodenticides after a healthy barred owl nearly succumbed to rat poison in a North Vancouver park twice in the last month.

On April 30, Yasmin Abidi was passing through Heywood Park, across from Capilano Mall and along the Mackay Creek greenbelt, when she saw some people gathered around a very sick looking owl, perched on a branch and bleeding. She and some strangers sought out a rescue organization and eventually got a volunteer from the Orphaned Wildlife Rescue Society (OWL) to come.

After fending off dive-bombing crows for an hour and a careful operation to get the owl bundled up in a jacket and put into a volunteer’s cage, it was off to the OWL’s rescue and rehabilitation centre in Delta.

“Upon examination, there was a large amount of blood in the mouth. There was no other external trauma, meaning there was no other reason for that bird to be bleeding other than obviously rat poison,” said Rob Hope raptor care manager at OWL.

The most common rat poisons are blood thinners, which cause the rats to slowly bleed out. Any animal that eats a poisoned rodent, however, can become poisoned itself. Oftentimes it’s owls or eagles but it can also be people's pets, Hope said.

“It’s usually a death sentence and unfortunately, at this time of year, with them feeding babies, you know the babies are going to be getting those same contents so they could be dying in the nest and we would never know.”

The “Hail Mary" attempt at a cure is to give injections of vitamin K, which encourages coagulation again.

Thankfully, the bird has responded well to the treatment and is expected to survive.

“He’s doing quite well – lurky-perky.  We’ve run him on five days of vitamin K and his blood seems to have cleared up. He’s eating well, acting like he should, so he might be lucky,” he said.

Lucky happens to be the name Abidi has given him.

The bird had also been tagged. A search of its records showed it had been found sick in the same park and brought in to be treated for poisoning just three weeks earlier.

Now Abidi wants to see an end to the use of rodenticides that harm other animals. There have been petitions against the poisons across North America dating back to the 1960s, Abidi said, but they are still widely used.

“When you hold this creature in your arms, you see how it's suffering,” she said. “At some point it's just got to stop. ... What I would like to see is [rat poison] banned completely and I mean, like, worldwide.”

“We definitely want it off the market. There are alternatives out there,” he said.

Hope said he personally likes CO2 powered traps that quickly kill any rodent that sticks its head into it, allowing scavengers to claim the non-toxic remains.

“That's a humane, safe way of taking care of rodents without killing everything else in its path,” he said.

No trap will ever be as effective as a healthy owl, though, Hope said. Earlier this year, volunteers picked up two dead great horned owls within a couple blocks of each other in North Vancouver.

While governments have been sluggish to respond to calls for a ban, consumers should tell the restaurants and supermarkets they shop at to stop using poison to deal with rats, Abidi said.

“Because, putting down rodenticide is really cutting off the natural circle of life and it's just a matter of time before we lose all of our beautiful birds,” she said.

Eventually Lucky will be released back on the North Shore, although somewhere far away from Heywood Park, Hope said. He’s lived up to his namesake twice. Another trip back to the rescue centre and his luck may well have run out, he added.