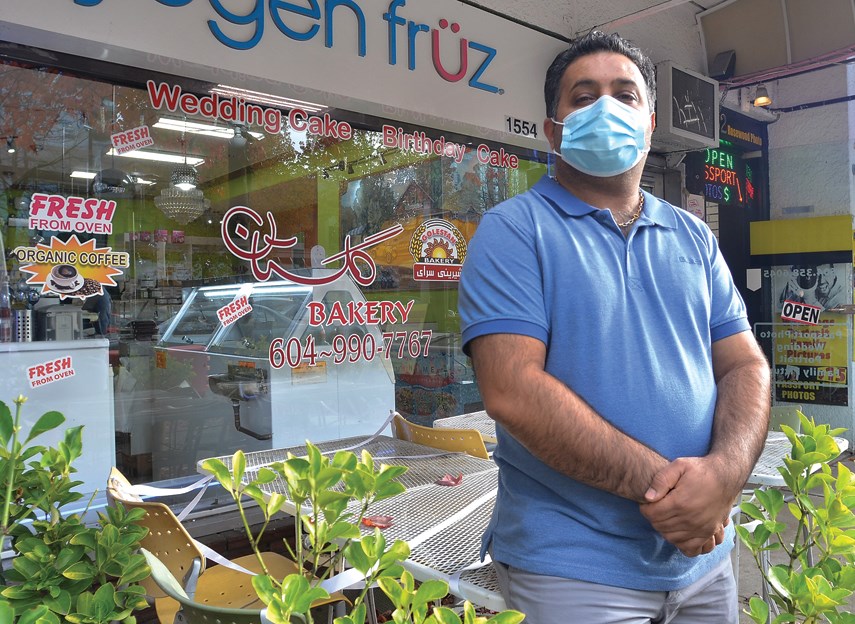 Jalal Darvishi, owner of the Golestan Bakery, a fixture on Lonsdale Avenue for 23 years, says he is being evicted after being unable to pay his rent during the pandemic.

For Darvishi, who has run the popular Persian bakery since 2008, it’s a bitter mouthful to swallow.

Under Golestan’s rental agreement with property owners Siddoo Properties, Darvishi said his rent is $7,200 each month for the shop location at 1554 Lonsdale.

But when the COVID-19 lockdown hit, just before Norouz festivities in March, Darvishi says his business plummeted and he was forced to temporarily shut the doors. He managed to pay partial rent for March, but when April arrived, “I said, ‘I can’t pay you,’” said Darvishi.

Darvishi said he knew about the federal program that offered rent assistance to commercial tenants, and tried to get his landlord to apply for government help, to no avail. That program, which ran from April to September, provided up to 50 per cent of commercial monthly rent. Tenants were still required to come up with 25 per cent of the rent, while landlords were expected to accept a 25 per cent loss.

Darvishi, who also runs storefronts in West Vancouver and downtown on Robson Street, said his other landlords quickly agreed to join the program.

But not in North Vancouver.

The province tried to encourage landlords to take part, by making it illegal to evict while the program was ongoing. But when the federal program ended on Sept. 30, so did the moratorium on evictions.

On Oct. 6 Darvishi was served with an eviction notice, which was followed up by a visit from a bailiff Oct. 22.

If he has to close his shop, up to 14 employees will be out of work, said Darvishi, and his other storefronts are in jeopardy.

Darvishi and his landlord are now in court, where a hearing on Siddoo Properties’ request for possession was set for today. Neither company owner Ravinder Siddoo nor his lawyer returned a request for comment.

Bowinn Ma, recently re-elected MLA for North Vancouver-Lonsdale, said Golestan isn’t the only business where the landlord refused to apply for federal aid.

Ma said her office heard from many businesses whose landlords didn’t want to take part in the program. “It’s very widespread,” she said, adding she’s heard from many tenants in lower and central Lonsdale, Marine Drive and Esplanade.

Ryan Russell, vice-president of property services for Gulf Pacific, which manages commercial property on the North Shore, said he thinks most landlords did try to help their tenants, including the ones he deals with directly.

“Every one of our landlords partook in the program,” he said. “It was a lot of work on the landlords’ side of things.”

Russell said some of the rules meant businesses who needed help didn’t qualify. Businesses had to see their sales drop 70 per cent, for instance – and not everyone did, depending on how long they were shut down for.

At first, tenants with month-to-month tenancies also didn’t qualify (a situation that applied to Golestan Bakery). Then they did.

“The rules kept changing,” said Russell. “But unless you were engaged in following the updates, a lot of landlords missed the boat.”

Russell doesn’t blame anyone for the way the program was rolled out.

“Nobody was planning on the government having to step in and put out billions of dollars to help small business in a pandemic,” he said.

“Money got to the landlords quickly once it was approved. [But] it didn’t get to all the businesses.”

A new program – which is still in the process of being adopted by the federal government – will likely be an improvement.

The Canada Emergency Rent Subsidy (CERS) will allow businesses to apply for assistance directly, rather than relying on their landlords – and will provide a rent subsidy of up to 65 per cent of on a sliding scale. More businesses will qualify for help under the new program and businesses that have been “significantly affected by a mandatory public health order” can receive 25 per cent more under special “lockdown support.”

For local businesses, that’s a piece of rare good news in a brutal year. “It’s still a grind,” said Russell. “But compared to the rest of the country we’re not doing badly. Things are still open.”

He worries, however, about what this winter could bring if lockdown measures are tightened up.

“You can get kicked once,” he said. “Getting kicked multiple times is tough.”