Counterflow infrastructure reaching the end of its life
May 28, 2021 5:05 PM By: Brent Richter 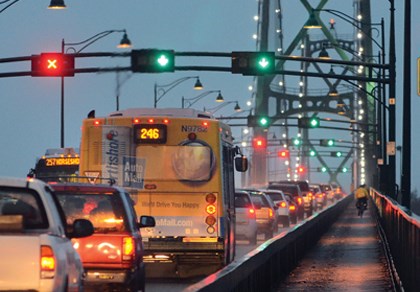 The province is about to start work on major upgrades to the Lions Gate Bridge counterflow system, which will result in lane closures, five nights per week.Mike Wakefield, North Shore News files

The Lions Gate Bridge needs almost $5 million in maintenance work and lane closures five nights a week if commuters want to continue going with the flow.

Starting the week of June 14, the bridge will have overnight lane closures from Sunday to Thursday while crews overhaul the bridge’s counterflow traffic system.

The province first installed the counterflow lane in 1994. It was last rehabilitated in 2002 and the infrastructure is now coming to the end of its life. The work involves replacing all the wiring, upgrading the signals on the bridge and Stanley Park Causeway with more efficient LED bulbs, and upgrading the software used to control the entire system.

To make that happen, crews will be taking one lane out of commission between 11 p.m. and 6 a.m., five nights a week until mid-November.

Toward the end of the project there will be some full closures of the bridge, overnight on weekends.

Sidewalks and bike lanes will remain open while the work is done.

Staff from Miller Capilano Highway Services monitor the bridge 24/7 and manually flip the direction of the counterflow lane to help ease congestion in downtown Vancouver or on the North Shore, depending on which side needs it more. They also shut down a lane whenever emergency crews need immediate access to the bridge or causeway.

Bridge commuters won't notice much of a difference once the project is complete, aside from brighter and more energy efficient signal lights, said North Vancouver-Lonsdale NDP MLA Bowinn Ma.

“But its importance really shouldn't be underestimated. This counterflow system is what enables us to get as much traffic capacity as we do from the Lions Gate Bridge, which supports up to 60,000 [crossings] per day,” she said. “The counterflow lane switches directions as much as 30 times a day. You can just imagine the chaos that can take place if we lose system reliability.”

The Ministry of Transportation and Infrastructure once considered a movable barrier for the counterflow lane using a “zipper truck” like the ones currently used on the Alex Fraser Bridge, Ma noted, but with so many switches per day, staff determined it wasn’t feasible.

Although traffic plummeted in the early days of the pandemic, it is now back between 80 and 90 per cent of its typical volume, Ma said.

The ministry has awarded a $4.7-million contract for the system upgrade to Paladin Technologies Inc. of Vancouver.

This stunning image taken from the Lions Gate Bridge shows the shoreline disappearing into the ocean (PHOTOS)
Feb 11, 2021 3:27 PM
Comments