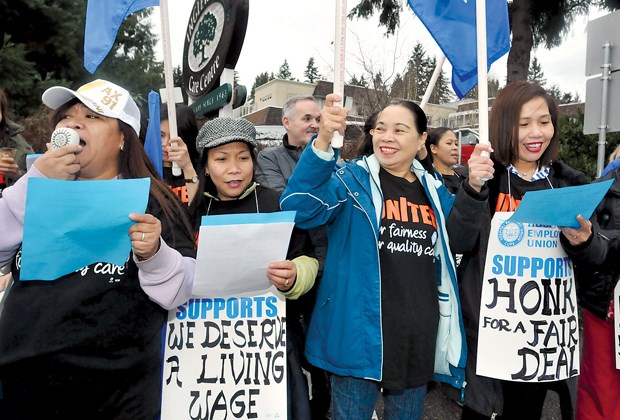 The Labour Relations Board has rejected a claim by the union representing workers at West Vancouver’s Inglewood care home that workers there were discriminated against by being offered lower wages than employees at other care homes because most of them aren’t white.

In a complaint heard recently by the Labour Relations Board, the Hospital Employees Union, which represents about 230 health-care workers at the home, claimed that CareCorp — the company which contracts to provide staffing at Inglewood — engaged in unfair labour practices by tabling a discriminatory wage proposal.

The union alleged wages paid to workers at Inglewood were less than wages paid by CareCorp to workers at other non-unionized long-term care facilities run by the same company. The other facilities include Eden Intermediate Care Centre in Chilliwack, New Horizons Community of Care in Campbell River and Sunridge Place in Duncan.

Work at all four facilities is the same, the union said.

The union alleged CareCorp’s contract proposal should be considered illegal because the company “intends to pay its mostly women of colour workers significantly less than its mostly white workers.”

In response to the union’s complaint, CareCorp asked the labour board to toss out the complaint, arguing race and ethnic background has nothing to do with what workers are paid at various facilities.

Wages paid at different sites are a function of the contract bids that were made for each facility, the company said.

It added wage rates were set before workers were hired and the company didn’t know then “who it would be hiring and how many employees would be white or non-white.” The company added it doesn’t track the racial or ethnic background of its workers.

In dismissing the union’s complaint, James Carwana, vice-chair of the board, agreed with CareCorp’s arguments.

Carwana noted some care aides at Inglewood already make more per hour than the top wage earned at one of the other sites.

Anyone working at the sites who qualified for the higher wage would get that, regardless of their race or background, he wrote.

“This indicates that discrimination on the basis on the basis of race, colour, ancestry or place of origin is not a factor in the wage proposal at Inglewood.”

Carwana noted that when the union was the bargaining unit for all four facilities — before CareCorp took over the staffing contract — it had negotiated different wage rates for different care homes.

Carwana wrote it was reasonable to assume any difference in wages is a result of economic factors, rather than discrimination.

The decision comes just as CareCorp has announced it is ending its contract with Inglewood’s owner in May.

The decision to end the agreement comes as the union was attempting to negotiate its first contract for workers under CareCorp. It also comes after the union issued strike notice in December.

The union has asked Vancouver Coastal Health, which regulates care facilities, to look into the issue of frequently changing contractors at the West Vancouver care home.

Since 2003, Unicare — the company that owns Inglewood — has had five different subcontractors providing care at the facility, including three providing personal care to residents.

The union says care aides at the facility earn about the same as they did 20 years ago.