A year after it sank to the bottom of Halkett Bay in Howe Sound , sea life is colonizing the wreck of the HMCS Annapolis, according to the Artificial Reef Society of B.C.
Apr 14, 2016 3:59 PM By: Brent Richter 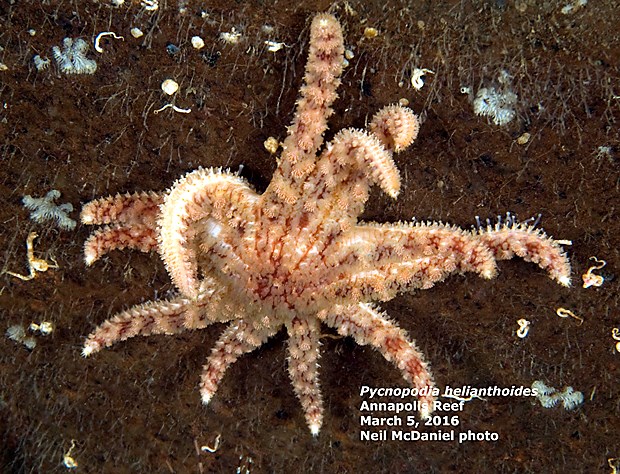 A year after it sank to the bottom of Halkett Bay in Howe Sound, sea life is colonizing the wreck of the HMCS Annapolis, according to the Artificial Reef Society of B.C.

The society issued a joint release with the Vancouver Aquarium last week detailing the species that have been spotted and catalogued by divers at the site. Among them: tubeworms, sea stars, anemones, mussels, prawns, rockfish, pollock and schools of perch.

“It’s really interesting actually. We’ve got members of all groups of animals that have settled in one form or another except sponges,” said Donna Gibbs, research diver and taxonomist with the Vancouver Aquarium. “Between those three sites within the studies I’ve done, there are 12 species that are unique to the Annapolis. I think that’s pretty interesting for a year.”

Prior to its controlled sinking, Annapolis saw more battles in the courtroom than she did on the waters, specifically over injunctions alleging the ship’s anti-fouling paint would be toxic to sea life.

The aquarium’s study should help allay those concerns, according to Rick Wall, Artificial Reef Society spokesman.

“We don’t need to be vindicated because we knew it was a good idea all along. We were just fighting the NIMBYs,” he said.

But the Georgia Strait Alliance, one of the groups that opposed the sinking, has not changed its position on artificial reefs.

“This is really not news, nor does it have anything to do with the concerns we have about the sinking of artificial reefs in the Salish Sea,” said Christianne Wilhelmson, the alliance’s executive director.

Artificial reefs like Annapolis may be depositing other toxic contaminants in the water, despite the aquatic life gravitating to them, Wilhelmson said.

“To my knowledge, nobody has looked at all these other ships that have been sunk and looked at long-term pollution and toxin contamination,” she said. “They should have to prove there will be no long-term toxic contamination to the environment.”

Wall said the society was only given the permit to sink the ship after a review by the federal government.

“Environment Canada has already ruled on that and there is no toxins and this study we’re doing with the Vancouver Aquarium will provide that objective evidence that they’re asking for.”

The wreck meanwhile has become quite a draw for local and tourist divers, said Kevin Breckman, co-owner of Sea Dragon Charters in Horseshoe Bay.

Sea Dragon has taken about 350 divers out to the site, many of them repeat visitors.

Divers who visit the site and take photos are encouraged to contribute to the Annapolis Biodiversity Index Study by logging their findings and uploading their photos to vanaqua.org/act/research/annapolis.