Historic Blue Cabin to be restored for artists

Editor's note: This article has been edited since posting to correct an error in the spelling of Glenn Alteen.
Jun 30, 2017 4:16 PM By: Brent Richter 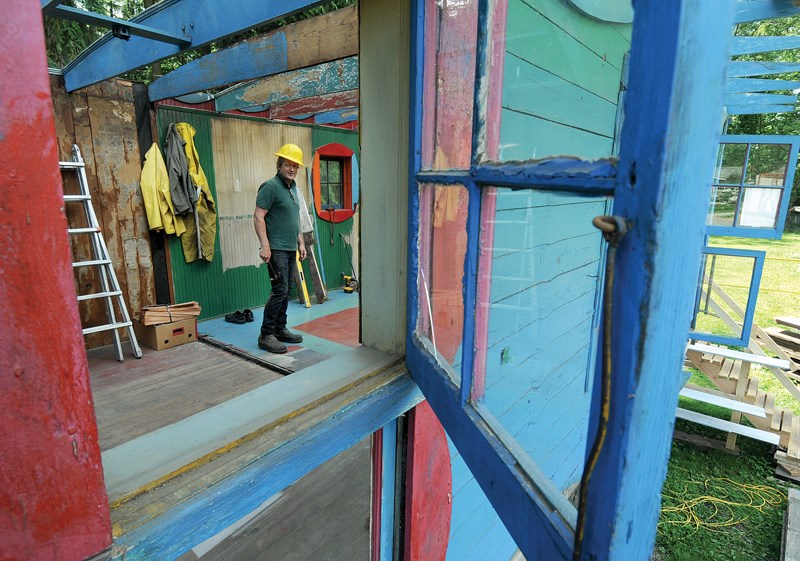 Editor's note: This article has been edited since posting to correct an error in the spelling of Glenn Alteen. Alteen is program director of grunt gallery in Vancouver, which has been involved with saving and remediating the blue cabin along with a team of volunteers. Click here for more details about the Blue Cabin Floating Artist Residency project.

A historic cabin that embodies North Vancouver’s industrial, countercultural and artistic history has been saved from scrap.

The Blue Cabin, which found itself evicted from the Dollarton foreshore in 2015, is now being restored into an artist’s studio.

“They’re essentially stripping it down, cleaning it up and putting it back together so that it’s the same as it was. It won’t look a hell of a lot different,” said Glenn Alteen, one of the artists leading the project to save it.

But there will be one significant twist. When it’s complete, it will be loaded onto a barge, along with a tiny house. The barge will eventually be made available as an artist’s residency that can be moored at various spots along the North Shore and False Creek.

“It gives the artist who’s there a really unique perspective on what Vancouver is and where it came from,” Alteen said.

The Blue Cabin dates back to the 1930s when the Dollarton foreshore was home to industrial workers living in shacks. Most were destroyed in the 1950s but the foreshore community saw a revival in the 1960s and ’70s when it became a communal home to squatters, hippies and artists. Among them were Carole Itter and Al Neil, who had held onto the little Blue Cabin since 1966.

“With that cabin is a whole bunch of history that, if it’s destroyed, is gone and it’s not coming back,” Alteen said.

The cabin was finally ordered removed from its pilings in the McKenzie Barge land next to Cates Park by the Vancouver Fraser Port Authority in early 2015. At that time, the land was being cleared for a redevelopment by Polygon.

A group of artists dubbed the Blue Cabin Committee scrambled to find a temporary new home and set to work raising funds. Since that time, they’ve pulled in about $300,000 in various arts and heritage grants, including $10,000 from the District of North Vancouver.

While undergoing restoration, the cabin is situated on the sheep pasture at Maplewood Farm.

“Which seems like a lot of money until you think of what it buys you in terms of an apartment for residency,” Alteen said.

And the floating squatter’s cabin is itself a piece of commentary, Alteen added.

“So much of Vancouver’s history is lost in this crazy bid for redevelopment and as a project, we think putting it on the barge with a small house is a statement. The small house is a product of how unaffordable cities have been. And squatting was a product of how unaffordable cities had been,” he said. “Vancouver’s unaffordability problems didn’t start 10 years ago.”