A North Vancouver engineering firm is hoping a new robotic dummy at the side of the road might provoke better behaviour from some real dummies on the road.
Nov 27, 2020 2:11 PM By: Brent Richter 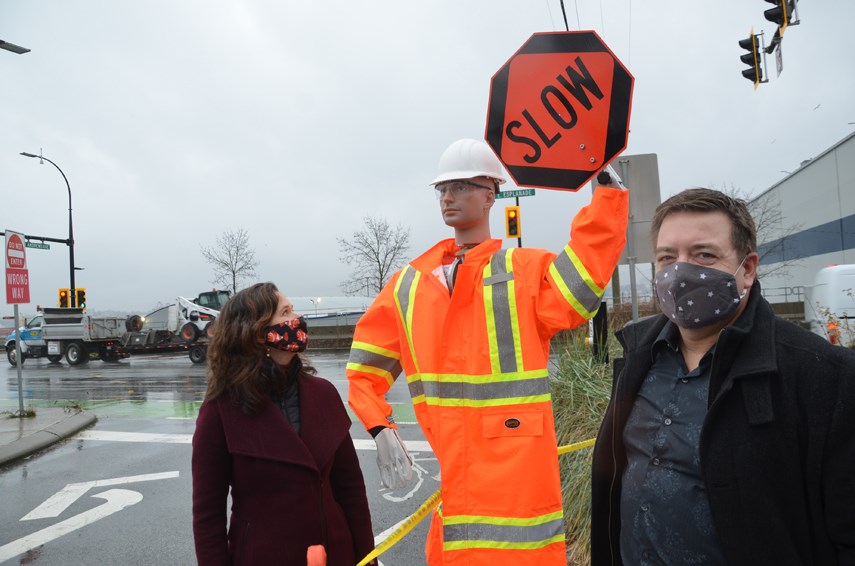 A North Vancouver engineering firm is hoping a new robotic dummy at the side of the road might provoke better behaviour from some real dummies on the road.

Mantech Manufacturing Technology is now field testing a robot traffic flagger intended to slow down drivers as they pass through construction zones.

Cone Ranger, as it has been dubbed, is currently waving his “Slow” sign at East Esplanade and St. Andrews Avenue.

Engineer Clayton Cunningham adapted the idea from something similar he saw years ago while driving on vacation in Switzerland.

“I saw this guy working, standing in the middle of the road, waving his arms and cautioning people, and definitely it slowed me down. … I thought, ‘That guy's kind of standing in a precarious spot all day,’” he said.

As he got closer, he saw that it was in fact a robot doing the risky but important work.

Cunningham sees the Cone Ranger ultimately as a supplement to flesh-and-blood traffic flaggers, “to help protect them,” not a replacement, he said. Between 2010 and 2019, there were 13 roadside worker deaths and 61 serious injuries, according to WorksSafeBC.

The principle underlying the battery-powered prototype is that a dynamic sign is more effective than a static one. The same basic idea has been applied elsewhere in Asia and Europe.

“The whole key is to be able to put them in precarious places and get some awareness, slow traffic down. If people think a human is standing there, they're going to be a little more careful than if it was just a sign,” he said. “They’re there to make construction zones safer for everybody.”

Right now, the plan is to market the Cone Ranger to companies that work in civil construction, but Cunningham said he could see it being used in school zones, ferry lineups, even on ski runs – anywhere you need to grab the public’s attention.

The one on the job now is the first prototype, but they have a more sophisticated model in the works that could be adapted to incorporate cameras, remote controls, a loudspeaker, sensors or other instruments, depending on a client’s needs.

It’s too soon to say how well Cone Ranger is doing in achieving its primary objective of making the construction site safer, Cunningham said, but there is no question it grabs people’s attention.

For a time, Mantech kept it outside their Harbourside neighbourhood office where it did just that.

“It was quite a few smiles and selfies,” he said.