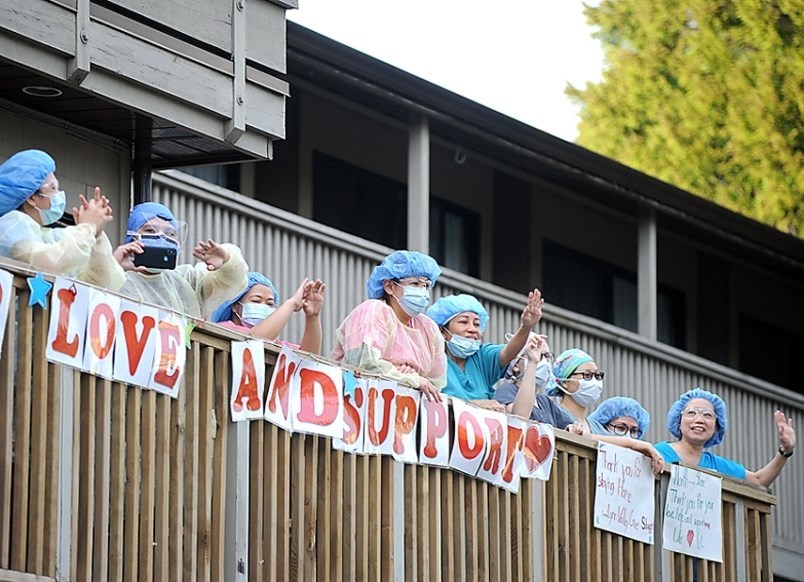 There can be no question what the biggest story of the year was. The COVID-19 pandemic left no facet of life untouched. But, even amid a year dominated by a virus, news continued to happen. Here, we offer some self-reflection on the most important things we reported on in 2020, pandemic or not.

We on the North Shore had the dubious distinction of having the first coronavirus outbreak in a seniors’ care home as well as the first death in Canada as a result. We documented the public health crisis as it happened. Reporter Jane Seyd spoke with the families of seniors who died in care and sought answers from the government. We brought you the stories of people we lost, so they would not become simply statistics.

We looked at the ways regular folks coped with a suddenly strange and isolated world. We strove to find stories about residents finding new ways to build community and uplift people’s spirits. The 7 p.m. cheer introduced a raucous cacophony to the otherwise quiet streets.

The pandemic was also a shock to the system for the economy. Our chambers of commerce moved rapidly to help local businesses find a way to keep their heads above water and get them government support.

In late May, a sense of optimism came back as businesses were allowed to reopen, albeit under some tough public health protocols that seemed strange at the time. We saw streets and parking spots converted for outdoor dining and active transportation. And the City of North Vancouver became the first Canadian jurisdiction outside Quebec to allow booze in parks.

With outside being the safest place anyone could be, our trails were flooded with visitors. Some of the most popular attractions like Quarry Rock and the Lynn Canyon Suspension Bridge remain closed. North Shore Rescue set the record for the most call-outs in a year, while carrying out their first-ever rescue using night vision goggles. The province introduced a pass system for anyone wanting to visit the trails on Mount Seymour or Cypress Provincial Park.

In January, the North Shore’s sizable Iranian community and their neighbours were rocked by the shooting down of Ukraine International Airlines Flight 752 in Tehran, killing 176 people. At least seven of the victims were North Shore residents.

Transportation being a perennial issue, we reported on the introduction of ride hailing to the North Shore, the quiet debut of the R2 Marine Drive RapidBus, a study into the possibility of a rapid transit line downtown, the possibility of an e-bike sharing program, and updates to the $200-million Lower Lynn improvement project. Traffic fell by roughly 50 per cent on the two North Shore bridges during the early days of the pandemic but gradually returned to near normal by the end of the summer. And the replacement of the Mosquito Creek Bridge introduced a major bottleneck on Marine Drive.

Our police and courts remained busy as ever. In September, North Vancouver was shocked by a targeted shooting in Central Lonsdale that left one man dead. It remains unsolved. We also saw the sentencing of a West Vancouver man convicted in the 2015 death and dismemberment of his millionaire relative at their shared British Properties home. And after years of court actions, North Vancouver’s former illegal hostel hostess Emily Yu was forced to sell her townhouse and move out.

Tragedy struck in October when a sudden release of water from the Cleveland Dam drowned a North Vancouver father and son. Metro Vancouver blames the disaster on human error, but we have many questions still to be answered.

In local environmental matters, looper moths took a bite out of our forests as their population soared. The District of North Vancouver voted to get tough on people who leave garbage out, putting bears in danger. All three local councils voted to ban rodenticides on their own facilities over fears the bleed-out poison was killing owls. And young activists demanded climate action in Canada’s recovery from COVID-19.

With everything going on, you wouldn’t think anyone would be readying for an election. But you would be wrong. In a snap provincial election in October, North Shore voters elected two BC Liberal MLAs and two NDP ones, with NDP candidate Susie Chant upsetting multi-term Liberal parliamentarian Jane Thornthwaite in North Vancouver-Seymour. The Green Party of BC very nearly stole the West Vancouver-Sea to Sky riding from Liberal Jordan Sturdy, but he was confirmed re-elected following a judicial recount.

While District of North Vancouver council largely shut down for the first half of the year, the City of North Vancouver remained committed to keeping the business of the city moving with continued development being part of their economic recovery strategy. The first crop of municipally approved pot shops started opening. When district council resumed regular meetings, they advanced affordable housing projects, brought in higher GHG emission standards for new buildings, contemplated a ban on fireworks, and threatened to fine people who leave Christmas lights on after 11 p.m. The District of West Vancouver teetered on demolishing Navvy Jack House, the oldest building on the North Shore, but later held off. Council advanced an affordable housing project on Gordon Avenue and controversially gave the OK for developers to add more storeys and units to towers under construction.

On the education front, schools were pretty well closed as of spring break and teachers and families switched to remote learning in March. Our grads had to find new ways to celebrate. And, with much trepidation from parents, schools reopened in September under strict protocols. The West Vancouver school board kicked out an elite hockey academy, which sought – unsuccessfully – to move to North Van.

Frankly, it’s been a year.