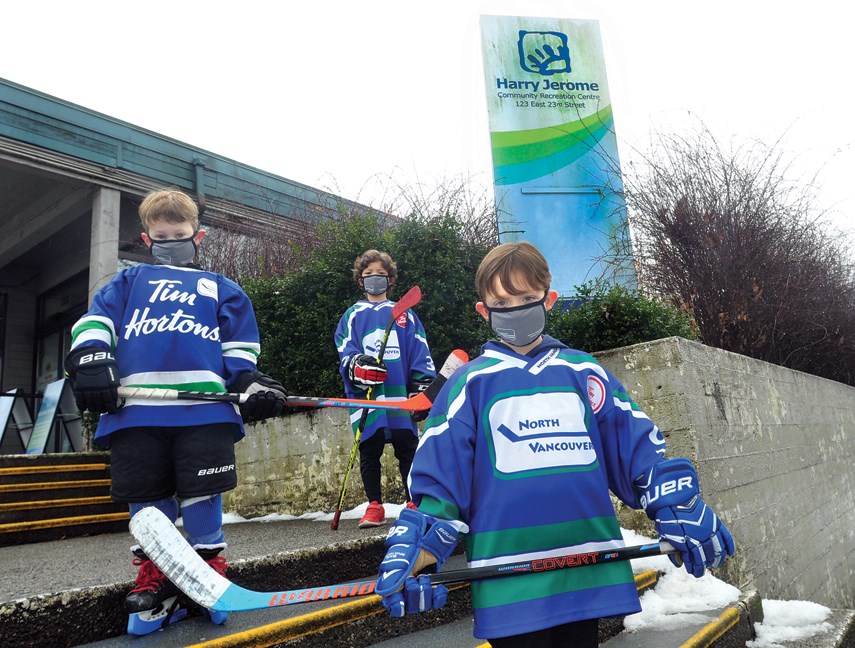 North Vancouver minor hockey players Bryce Wettlaufer, Alexander Curll and Blake Lefaivre may be looking for other rinks to play in as Harry Jerome Rec Centre ice may not be available for at least 3 years while the new rec centre is under construction.Paul McGrath, North Shore News

The multitude of sports user groups who have called the Harry Jerome Community Recreation Centre home for decades are scrambling after learning their aging rec facility will close at the end of 2021.

Members of local hockey, swimming and gymnastics organizations say they were caught off guard last month when the City of North Vancouver quietly confirmed the existing rec centre would be shut down at the end of 2021, rather than when the new rec centre came online, likely in 2025.

“It was impressed upon us that there’d be no gap in between moving from one facility to the other,” said Lawrence Smyth, North Vancouver Minor Hockey Association president. “It did definitely catch us by surprise.”

The association has 45 teams and more than 700 players, for whom it was already a challenge to find ice times, Smyth said. It will likely mean more 5:45 a.m. practices in the future.

“I think the parents don’t particularly like it. The kids don’t seem to care,” Smyth said.

The North Van Wolf Pack, a Junior B team that plays in the Pacific Junior Hockey League, will be losing their regular Saturday night home ice, which they’ve had for the last 11 years. CEO Dave Samson said he is hoping the city will help get them a regular puck-drop at Karen Magnussen Community Recreation Centre, but as a team that relies on ticket-buying fans to stay afloat, they are already in a precarious position.

“We didn’t have any real notice that this was going to happen,” he said, noting he and other members of the Wolf Pack leadership have attended almost every meeting the city has had related to the design and rebuild of Harry Jerome.

The loss of pool time comes as insult to injury for the swimmers who were already feeling let down by council’s decision in 2020 to reduce the size of the new pool from 50 to 25 metres.

“For them to not consult us or involve us in the decision making, it’s not right,” said Chena Swim Club president Eddie Simard. The group has 150 young members, and there are several other swim clubs who will be impacted, but swimmers who want to compete at higher levels already have to leave the North Shore, Simard said.

“We just don’t have the proper facilities over here anyways, and now we’re going to lose another facility,” she said.

Shane R. Hopkins, president of the Cruisers Aquatics group, said he only learned in the last week about the city’s plans. His group, which includes more than 100 divers, water polo players, speed and artistic swimmers, has already been shunted around in recent years. “That’s one of the few places we’ve actually been able to train for a long time,” he said. “I’m not entirely sure where we will get pool time. As it is, we’re really quite strained.”

Flicka Gymnastics has been hunting for a new home, but right up until the hours before the city put out a press release on Jan. 20, they believed they’d be able to extend their lease, said Kerri Postill, co-president of the club. “We were 100 per cent caught off guard with no home to go to,” she said.

It leaves 2022 very much in question, added Sue Whittred, Flicka co-president. “Even if we can find a facility, the likelihood of us being able to afford it is not great.”

In an interview, Mayor Linda Buchanan said an early closure of the centre has been on the table since her council made financial “risk mitigation” for the project a priority in 2018, and the user groups should have been aware then.

Council made the decision to close the centre early as part of the lease negotiations with Darwin Properties, which is developing the surrounding neighbourhood and putting up cash for the Harry Jerome rebuild. Doing so will save the city from having to take out a $115-million loan to finance the project.

“Given current economic times, it would have been a huge risk for the city. This way, we’ve got the money in hand and we’re able to do that tender and move forward confidently,” Buchanan said. And the decision is final, she added. In the meantime, Buchanan said she has faith in city staff to work with the sports user groups to find suitable accommodations.

“But it is going to require that all groups are going to need to compromise and have some flexibility,” she said. Council has made a goal of shaping the “healthiest small city in the world.”

Buchanan said apart from the new Harry Jerome, council has invested millions in other recreation facilities. “I always say people’s health isn’t just contained to four walls within a building. It is about all the assets that we have,” she said.

Anne Rodgers, communications co-ordinator for the North Vancouver Recreation and Culture Commission, said some full-time staff will have to transition to working from home while their offices are replaced, but there are others whose jobs will be impacted. “Our intention is to relocate as many of our full-time staff as we can into vacancies and needs in other facilities,” she said.