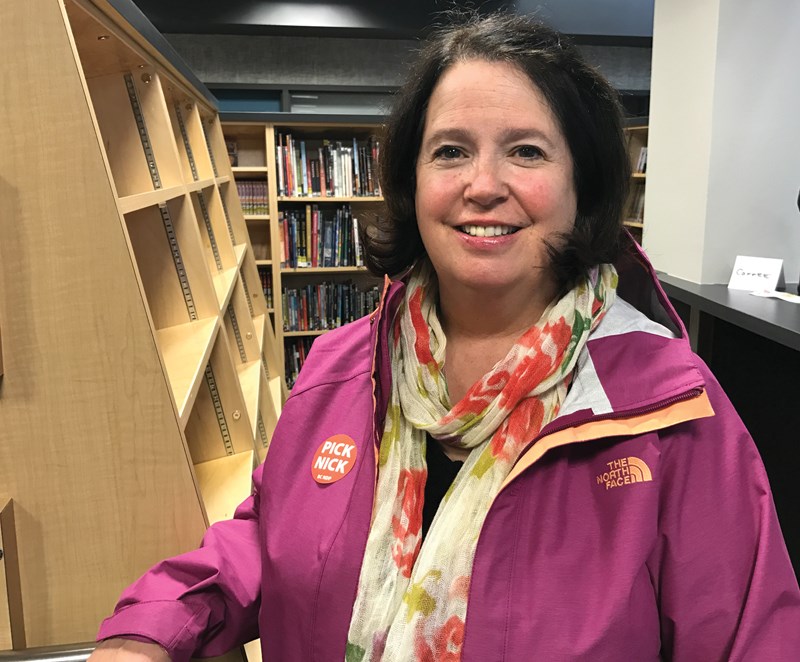 A woman who told Liberal leader Christy Clark that she wasn’t going to vote for her at a meet-and-greet session in a North Vancouver grocery store Thursday quickly found herself at the centre of a social media firestorm.

Linda Higgins, of Gibsons, said she was just speaking her mind when Clark stopped to shake her hand at the Persia Foods market on 15th Street during a campaign stop in North Vancouver April. 27.

Higgins said she was surprised to find herself suddenly being portrayed on social media as the voice of disaffected citizens under the hashtag #IAmLinda.

But “It’s giving voice to people to speak about their concerns,” she said.

Higgins said she was in North Vancouver last Thursday with her husband, who had a medical appointment, and they had just finished lunch when she noticed the Liberal leader’s campaign bus pull up.

Higgins said the decision to speak with Clark, who was accompanied to the store by North Vancouver Liberal candidates Naomi Yamamoto and Jane Thornthwaite, was spontaneous. “I just wanted to introduce myself and tell her I wasn’t going to vote for her and these were the reasons,” she said.

Clark’s response to Higgins – captured on several seconds of video – was to cut Higgins off mid-sentence, commenting, “That’s why we live in a democracy,” before briskly moving on.

“I didn’t want to be disrespectful to her or mean,” said Higgins on Monday. “I think it’s important for her to hear from the Joe Average voter.”

Among the issues Higgins wanted to talk to Clark about were education cutbacks and the skyrocketing cost of housing in the Lower Mainland that has left her adult children scrambling, even though they are professionals who earn a good income, she said.

Higgins said she didn’t even realize the video of her comments had gone viral until her nephew called her later, saying, “Aunty Linda, you’re trending on Twitter.”

Most comments have been “very positive,” she said. “It’s not about me. It’s about Christy Clark and how she responded to me.”

A retired social workers’ assistant and grandmother, Higgins said the only thing that’s bothered her are public suggestions by Liberal campaign manager Laura Miller and Clark’s ex-husband Mark Marissen that she was an “NDP plant,” which she said isn’t true.

“I’m not a card-carrying NDP member,” she added. “I don’t belong to any party, never have. I have voted Liberal in the past. I voted Liberal federally.”

This week, Clark appeared to backtrack on the incident, telling a C-FOX radio host that in retrospect she wished she’d stopped and spoken to Higgins. “. . .  I just do move a little bit quickly. But you know, the thing is we live in a democracy, and she gets a chance to confront me and tell me she doesn’t like me – and good for her, right?” Clark said.

Higgins said the incident has been a bit strange for her. “I’m not a public person,” she said, adding, “I will speak when I need to and I don’t hold back.”

Liberal candidate Naomi Yamamoto, whose riding Clark was mainstreeting in when the incident occurred, did not respond to a request for comment.