Gil Graham was part of a team reopening a work camp that had been shut down by COVID-19 when a bear appeared out of nowhere and pinned him down while trying to escape danger.

Kyle Balzer
Jun 18, 2021 12:24 PM
Previous Next
1 / 1 Coquitlam's Gil Graham seen here at Tsay Keh Dene, a First Nation clinic at the far northern end of Williston Lake on May 31 after he was attacked by a black bear. He was later taken to hospital in Prince George for surgery.Submitted
Expand
Previous Next

WARNING: A photo within the following story may be too graphic for some readers. Discretion is advised.

Gil Graham is recovering from what he calls a "super lucky" scenario after getting attacked by a black bear.

The Coquitlam resident suffered wounds on his left thigh after a big bruin charged and pinned him down while in northern B.C. last month and, according to a GoFundMe page, the recovery process is likely to take more than a year of physiotherapy.

Friends of the 65-year-old and his family have created a fundraising campaign with a goal of $50,000 to help cover unexpected costs and expenses resulting from the incident.

"Gil has worked in the mineral exploration industry for more than 40 years for a variety of exploration companies as a highly-skilled field technician often working in remote and isolated regions across British Columbia and Canada," writes organizer Scott Smith.

"We know that friends within and outside of the exploration community along with so many people that have met Gil can help. Gil is truly a one-of-a-kind, stand-up guy with a great sense of humour and a sincere willingness to help others before himself."

Since the page went online, and as of this publication (June 18), nearly $15,000 has been raised for Graham's recovery.

On May 31, Graham was with a team reopening a workcamp that had been closed during the COVID-19 pandemic and the job was supposed to last several months.

The bear attack, which Conservation Officers have since determined to be a "startle event," happened just hours after his team arrived at Williston Lake, more than 300 km north of Prince George. 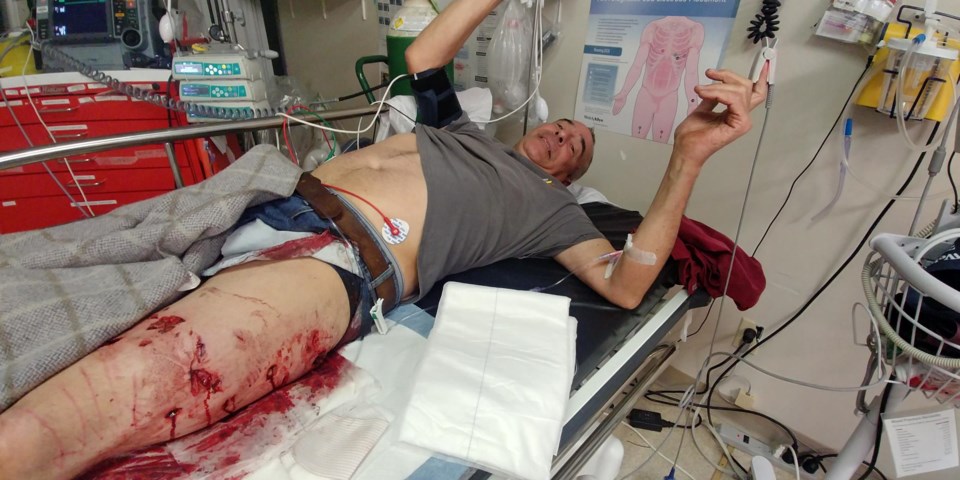 Coquitlam's Gil Graham seen here at Tsay Keh Dene, a First Nation clinic at the far northern end of Williston Lake on May 31 after he was attacked by a black bear. He was later taken to hospital in Prince George for surgery. By Submitted

Graham went behind one of the bunkhouses to turn on the propane and light up a furnace and because he was going to be alone, he checked to be sure the coast was clear before proceeding to the spot.

But when he stood up to leave the propane tanks, he spotted a "big black mass" out of the corner of his eye and down a slope behind the building.

"I look down, he looks at me, his ears are back, his paws are down, and we're about five feet apart," Graham said in an interview with Glacier Media. "It was at close range and I know this isn't going to go well."

After the two circled each other, Graham says the bear lunged at his thigh and he couldn't escape. While trying to whack the bruin on the nose with a metal flashlight, his co-workers threw a large boulder that landed on the bear's haunches, which got the animal to back off but not enough to make it leave the area.

It charged the co-workers forcing them to retreat inside and the animal went back to pin down Graham. The team then came out a second time with a truck and successfully scared it off by throwing more boulders, honking the horn and speeding in its direction.

WHAT'S NEXT FOR THE TENURED WORKER?

Graham explains this all happened during a time when he was trying to "quietly fade out of the business," one of which he has had many other bear encounters, but none that came so close.

However, given the severity of his wounds, it's believed Graham may realistically never return to his field of work again.

"I can't say enough about how well I was cared for and how smoothly everything went," he said.

"Panicking wouldn't have had any mileage to it...so better to take measure of what's going on and trying to get the upper hand by working with your pals and get this thing off of me."

Graham eventually ended up at University Hospital of Northern BC (UHNBC) in Prince George for surgery and returned to Coquitlam with a vacuum pressure bandage around the wound.

He's put in a claim to WorkSafeBC and has been set up with all the medical equipment he needs as he recovers.

If you wish to contribute to the GoFundMe campaign for Graham, you can visit the crowdfunding company's website.

According to Graham, any unused funds will be donated for the University of Northern BC's (UNBC) nursing school.