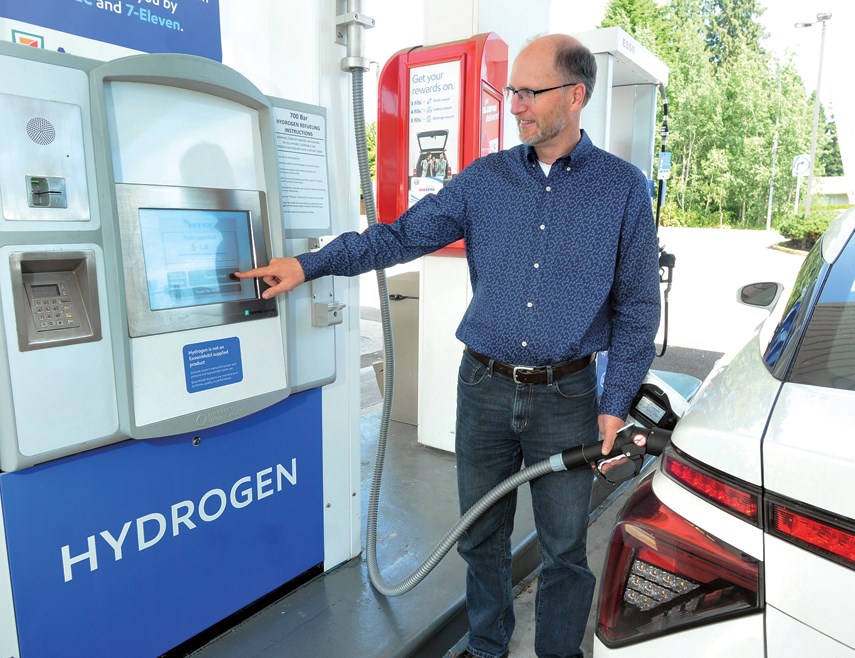 The company behind the pump is North Van hydrogen tech pioneer HTEC.

“It opens up [hydrogen] for the whole North Shore clientele, which is a very target market for early adopters, so it is super exciting,” said Colin Armstrong, HTEC CEO.

Keeping a car running on the lightest element on the periodic table will cost $12 per hundred kilometres – about the same as gasoline – but the only emission from the tailpipe is water vapour.

It is the third hydrogen fuelling station in the Lower Mainland to come online. Filling up at the North Vancouver pump would allow a driver to get to Whistler or Tofino and back, Armstrong said. Victoria’s first hydrogen station is now under construction and Kelowna is next on the list.

“It’s coming on fast and we’re trying to wrap it up as fast as we can,” he said.

There are currently only “a little over 30” hydrogen vehicles in the Lower Mainland that will be able to top up at the station, but that’s about to change, Armstrong said.

The Toyota dealer in the Northshore Auto Mall has a new hydrogen Mirai on the lot, listed for just over $73,000, and more models from other manufacturers are on the way, Armstrong said.

“I think the goal is to probably have closer to 200 by the end of the year,” he said.

Natural Resources Canada and the province are both supplying funding for the station in a step towards greenhouse gas reduction targets.

Battery electric vehicles have seen the most take-up in the market for zero-emission vehicles so far, Armstrong conceded, but as government regulations and consumer demand ensure the obsolescence of gasoline and diesel engines, hydrogen will have its place.

“There’s still 98 per cent of the market that’s available,” he said.

Battery electric cars are ideal for people who can charge up at home overnight and make mostly shorter trips, but a hydrogen vehicle can refuel in just a few minutes before getting back on the road. And, Armstrong said, hydrogen is the most promising option for light trucks and heavy-duty vehicles, which will spur on more hydrogen fuelling infrastructure in the market.

“I’d say there’s going to be a lot of hydrogen and a lot of battery electric, so that ship has definitely not sailed,” he said.