Shari Ulrich and Brent Comber this year's recipients of arts awards
Nov 7, 2014 12:00 AM By: Erin Mcphee 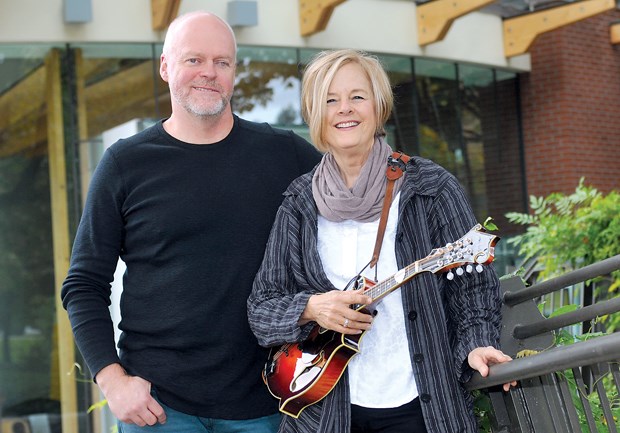 Bowen Island musician Shari Ulrich and West Vancouver designer and sculptor Brent Comber have been named recipients of the 2014 FANS (Fund for the Arts on the North Shore Society) Distinguished Artist Award.

The honour is bestowed upon local artists who've been nationally, and often internationally, recognized for achievement in their particular discipline, states Lori Phillips, FANS president, in an email.

"FANS believes that by recognizing and honouring our artists we acknowledge and nurture the wealth of artistic talent found in our own community," she says.

Ulrich and Comber will receive their 2014 awards at the FANS Tribute to the Arts event, open to the public, Friday, Nov. 14 at 7 p.m. at North Vancouver's Gordon Smith Gallery of Canadian Art. Local actor Jay Brazeau, who is also a previous FANS Distinguished Artist Award recipient, will serve as MC, and Ulrich is slated to perform.

"As the only public arts event of its kind on the North Shore, the FANS Tribute to the Arts Event is a unique opportunity to recognize outstanding artistic achievements by local artists," says Phillips.

This year's set of winners most definitely speaks to the society's mission. "Both artists are tremendously accomplished in their respective fields and are very deserving of the award," she says.

"We are delighted to shine a spotlight on them here at home," she adds.

Ulrich is a two-time Juno Award winner and B.C. Entertainment Hall of Fame inductee. Her career dates back to the 1970s with her involvement in Pied Pumkin and then The Hometown Band. She's currently promoting her eighth solo album, Everywhere I Go, and has been nominated for the 2014 Canadian Folk Music Awards for Solo Artist and Songwriter of the Year, as well as for her work with The High Bar Gang. Comprised of

Ulrich, Barney Bentall, Rob Becker, Wendy Bird, Angela Harris, Colin Nairne and Eric Reed, the ensemble received nominations for album Lost and Undone: A Gospel Bluegrass Companion, in the categories of Traditional Album of the Year, Vocal Group of the Year and Ensemble of the Year. Ulrich is set to perform at the awards ceremony, which is being held in Ottawa at the end of the month.

Apart from music, she is further exercising her creativity by tackling an autobiographical writing project.

Ulrich is pleased to be a recipient of the FANS Distinguished Artist Award.

"There aren't a lot of ways to be honoured in the music business. There are award shows, but they're very contingent on having a new album and then that album having the kind of promotion that garners that kind of award. This has nothing to do with the business. It's just about, I like to think of it as, what I might have brought to the community through music. It feels really good," she says.

Comber views the work of FANS as an important means of encouraging new artists to realize their own unique potential.

"I do like shining spotlights on artists in general because I get encouraged when I hear about artists becoming successful and becoming more familiar to the populace, especially on the North Shore," he says. "Because I really think it could be a good career path for fellow artists or people thinking about becoming an artist. It's just another way of shining a light on a direction that is becoming more and more acceptable. It wasn't that long ago, like before the Bryan Adams and the Doug Couplands, it was sort of unusual and really unusual I guess for people to be making a go of it as artists."

Comber, who maintains a studio in North Vancouver, specializes in the design of contemporary urban forms from ancient sources, according to FANS.

A current project he's working on is the creation of a number of pieces of furniture to be housed in Canada House in London, United Kingdom. Comber is among the Canadian artists contributing pieces intended to showcase coast-to-coast style.

Comber credits his own signature approach to growing up and living on the North Shore, which has long allowed him the quick ability to interface with nature. "I like to experience being in it immediately and so the North Shore is wonderful for that," he says.

It's also a community rich in creativity.

"The North Shore has been a home to a lot of artists actually in one form or another," says Comber.

Initiatives like the FANS Tribute to the Arts play an important role in bringing the local artistic community together, something he's experienced firsthand as a result of his involvement this year. Following the announcement of their being awarded, Comber and Ulrich have formed a fast friendship. The singersongwriter reached out to the designer, interested in familiarizing herself with his work.

"Just making that connection with another artist is really nice," she says.

"I made a special trip over there to hear her in a one-person concert in a church and it was really amazing," he says.

Five other local artists will also be awarded at the FANS Tribute to the Arts event next Friday, presented with career development grants.

"(The) FANS Society is extremely proud of this unique grant program, which directly benefits our deserving community artists who are interested in developing their practise," says Phillips, explaining the program was developed to address a perceived gap in funding available to individual artists at the grassroots level.

Apart from the annual awards program, representatives of FANS have launched a membership option for community members to become more involved with the society throughout the year.

"We are always interested to hear from people who are passionate about the arts and would like to assist FANS in encouraging and supporting local creative talents," says Phillips.

Next year, the society will celebrate its 20th anniversary and is seeking to bring its endowment up to $100,000 from where it currently sits at $82,000.

"We're looking to raise $18,000 over the coming year," says Phillips. "It's a big challenge but we know that investment in the arts translates into vibrant creative communities and improved quality of life for us all."