The late-fall rain and cold is now sufficiently miserable enough for the North Shore’s emergency shelter for the homeless to open up. The province funds 20 beds at the shelter at 705 West Second St.
Nov 24, 2016 3:48 PM By: Brent Richter 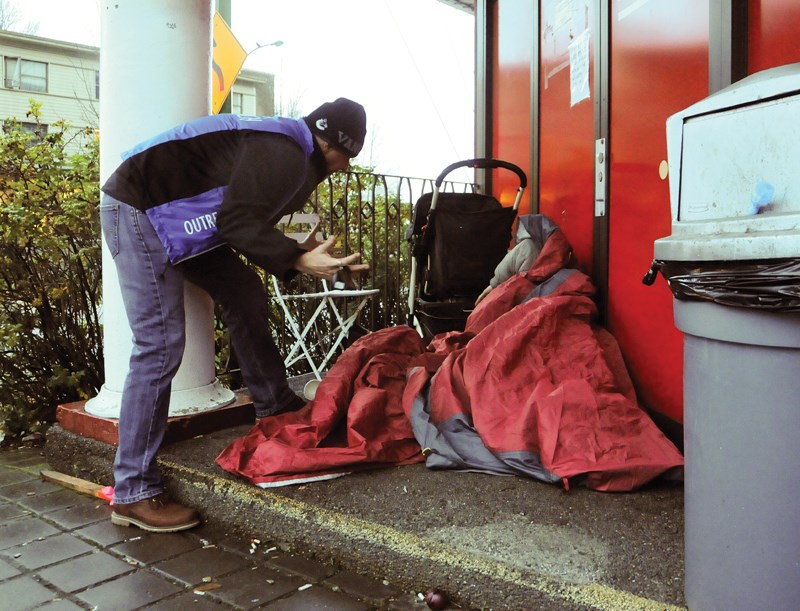 The late-fall rain and cold is now sufficiently miserable enough for the North Shore’s emergency shelter for the homeless to open up.

The province funds 20 beds at the shelter at 705 West Second St. when there are two days of heavy rainfall with any other weather warning forecast. There are also another 25 beds ready to be set up at North Shore Neighbourhood House in case of overflow.

“We haven’t ever opened up the secondary site but I’m thinking this year, it’s a good chance. It’s supposed to be a cold year and our numbers seem to be up for homeless on the North Shore,” said Bailey Mumford, shelter manager.

The last official homeless count in 2014 noted 119 individuals living homeless in North Vancouver and West Vancouver, although the number is most likely higher.

There’s also been an increase of seniors and of people living in cars and RVs.

Even when the weather gets truly awful, some people choose to live “rough” for a variety of reasons. Couples are sex-segregated in the shelter and may choose to remain together outside, and oftentimes, there’s only room for one half of a couple indoors.

“Female beds are at a premium right now. At one point, we had seven women vying for one bed,” Mumford said.

Those who come into the shelter are far more likely to get connected with other services, including a chance at finding more permanent housing. That too, however, is getting more difficult thanks to a lack of affordable units.

“Those just don’t exist anymore and if they do exist, they’re generally going to the young couple going to CapU or something like that as opposed to one of our guys,” Mumford said. “People can just charge more for rents at this point. That’s something we’re seeing across the board from here all the way to Abbotsford.”

The province has announced more than $500 million for new supportive and affordable housing, although none of it has been earmarked for the North Shore. Mumford said the most helpful thing the municipalities can do is offer up some land as the province is far more likely to pay for capital building costs. Both the city and district are eying options to do just that.

In the meantime, the community can help directly by dropping some badly needed items off at the shelter.

“Christmastime is coming so we’re always looking for donations of all kinds – warm clothes, socks, jackets, razor blades is a big one for us, toiletries. Donating money is always quite helpful too,” Mumford said.

Even in affluent neighbourhoods of the North Shore, there are people who would benefit from supportive housing centred around mental health and addiction, Mumford said.

“There are a lot of people with sons and daughters with mental health issues who are 30 to 40 years old, living at home still because there are no services there,” he said. “If you can start to create some of those networks for people in the community, we’re going to be able to keep North Shore people on the North Shore in subsidized living environments. Otherwise, they’re going to have to go to the Downtown Eastside or as far away as Abbotsford.”